Science hasn't discovered the ideal antibiotics to treat urinary tract infections. All of those available have side effects in the short, medium, and long term. Also, bacteria tend to become resistant to their action. However, there are many options depending on the infection. 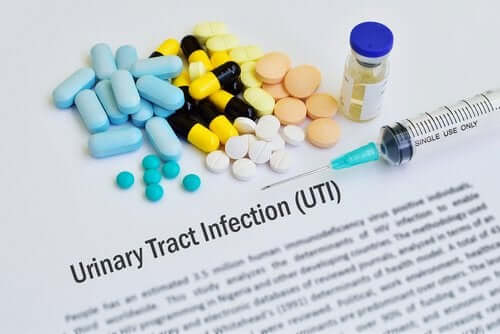 Urinary tract infections are relatively common. Women are more affected by them due to the shorter length of their urogenital tract. In fact, it’s estimated that at least one in five women will suffer from some form of urinary tract infection throughout her life. UTIs occur in any part of the urinary system. This means that they can be located in the bladder, kidneys, ureters, or urethra. However, it’s estimated that 80% of cases are of infections in the lower urinary tract, or the bladder and urethra.

The most common form of urinary tract infection is cystitis in women and prostatitis in men. In older adults, the incidence of the condition is similar in both sexes. Seasonal or geographical factors don’t seem to have any influence on these cases. In this article, we’ll take a closer look at what causes these infections and how antibiotics help treat them.

Bacteria are responsible for urinary tract infections. Between 70% and 90% of cases are due to the action of the bacterium Escherichia coli. To a lesser extent, other bacteria to blame are Proteus mirabilis, Staphylococcus coagulase, Klebsiella pneumoniae, and Enterococcus faecalis.

Some people are more likely to develop urinary tract infections, mainly those who suffer from diabetes, immunosuppression, or are at an advanced age. There’s also an increased risk of infection in those with neurogenic bladder, in people who have a urinary catheter, or people don’t empty their bladder.

The most common urinary tract infections in men are prostatitis, urethritis, epididymitis, and orchitis. In women, cystitis, and asymptomatic bacteriuria (especially due to pregnancy and/or micturition syndrome) are the most frequent.

You should also read: The Causes of Cystitis After Having Sex

The use of antibiotics

This article may interest you: Antibiotics: Some of the Inherent Risks

Antibiotic treatment is used keeping in mind the specific agent that’s causing the urinary tract infection. However, considering that most of them are caused by Escherichia coli, it’s best to start treatment for this bacterium while the medical professional waits for laboratory results.

Antibiotics, as well as most medications, have side effects. Some of them are immediate and, therefore, manifest shortly after taking them. They include fever, nausea, diarrhea, vomiting, headache, rash, tendon problems, and nerve damage.  Also, other side effects may manifest in the medium and long term. This is due mainly because most antibiotics affect vaginal and intestinal flora. Therefore, they increase the susceptibility to bacterial or fungal proliferation in the gynecological and digestive tract. This is why many doctors often recommend taking probiotics while being treated with antibiotics.

The biggest problem is that it’s easy for bacteria to become resistant to antibiotic treatment.

Scientists expect that, in the coming years, bacteria will develop resistance to many antibiotics. These include norfloxacin, ciprofloxacin, amoxicillin, and ampicillin, among others. So far, only fosfomycin trometamol seems to be strong enough to fight this effect. However, scientists are working hard to make sure there are still treatment options.