O'Sullivan's test is mandatory in several countries and there's some controversy around it. Its objective is to rule out gestational diabetes or to determine if there are any risks of having it later. 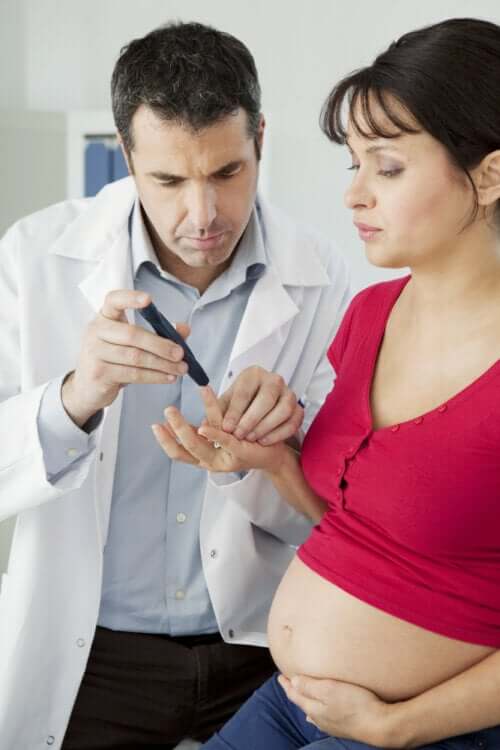 O’Sullivan’s test is designed to determine the state of a pregnant woman’s blood glucose. In other words, this test is for measuring blood sugar levels to find out if there’s a risk of gestational diabetes.

Gestational diabetes is a condition in which blood glucose increases due to the hormonal changes typical of pregnancy. Thus, it can affect the health of the mother-to-be and the normal development of the fetus and subsequent birth.

As you can see, it could compromise a baby’s health. It’s for this reason that O’Sullivan’s test is now mandatory for all pregnant women in many countries.

The purpose of O’Sullivan’s test

O’Sullivan’s test doesn’t diagnose gestational diabetes; instead, its main purpose is to rule out its existence. The results allow doctors to establish two things:

Some consider it the best test in terms of cost, benefit, and efficiency when it comes to ruling out gestational diabetes. If there’s any alteration in the results, then the physician will do a second, more specific test called the Glucose Tolerance Test. That’s why it’s important to note that O’Sullivan’s test results could result in a false positive.

Women under the age of 25 whose weight is normal and don’t have risk factors such as a family history of diabetes, previous gestational diabetes, or obesity are exempt from this test.

Keep discovering: Eleven Habits You Should Avoid During Pregnancy

A woman doesn’t have to take O’Sullivan’s test on an empty stomach. The first thing a doctor does is take a blood sample to quantify the glucose levels in it. Then, she’ll drink an overly sweet drink containing 50 grams of 25% glucose in 200 ccs.

The woman then sits for an hour after drinking the sugar load without eating or drinking anything else. After that time, the lab personnel draws a new blood sample to quantify its glucose levels again. The result indicates whether her insulin did a proper job or not.

If the results of O’Sullivan’s test are inconclusive or offer any indication that there’s glucose intolerance, then the doctor must do the Glucose Tolerance Test to confirm it.

When to do the O’Sullivan’s test

Usually, O’Sullivan’s test is applied to women between the 24th and 28th weeks of pregnancy. This is the most appropriate time for it because hormonal changes generally alter the functioning of insulin in the mother during this stage. However, they might have to do a test more than once.

If a woman had gestational diabetes in a previous pregnancy, then the doctor will do the test during the first trimester. The assumption is they’re at risk of having it again. This measure also applies when the mother meets one or more of the following criteria:

Find out more: Illnesses During Pregnancy that Every Woman Should Know About

Other things to consider

There’s a lot of controversy surrounding O’Sullivan’s test to the point that, in many countries, this test is only done when there’s an imminent risk. The controversy is because such a high glucose intake is toxic for some women.

For instance, some may vomit the glucose at the same time they drink it. Then, this may happen again if they repeat the test a few days later. It’s for this reason that this test can be torture for some mothers-to-be. Thus, there’s the option of reserving it for high-risk cases only.

The countries where the test isn’t mandatory must follow a protocol in which the mother is informed of the risks of the test and can choose whether to take it or not. Likewise, there are still doubts about the side effects of the excess glucose intake on the health of a woman and her baby.

Six Diseases that Are Common During Pregnancy
Learn about some of the most common diseases during pregnancy in this article so you can take great care of your body during this time. Read more »

Link copied!
Interesting Articles
Pregnancy
Is it Risky to Tan During Pregnancy?