The Longest Muscle in the Body: Sartorius Muscle

The sartorius muscle allows us to do basic leg movements such as bend and internal rotation. In this article, we'll tell you more and mention which injuries can affect this anatomical structure that is part of the so-called 'goose foot'. 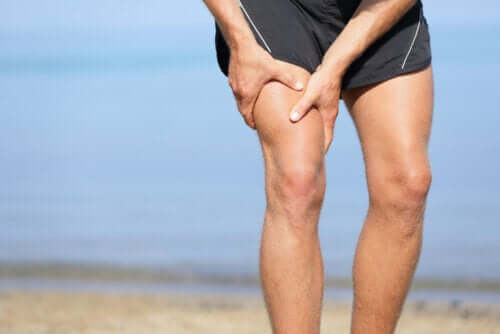 One of its main functions is bending. Its arrangement makes it possible to perform certain postures, such as crossing our legs when we sit. The problem is that, just like any other muscle, it can get injured. This can seriously affect all mobility of the lower extremities.

What is the sartorius muscle?

The sartorius muscle, as we’ve already pointed out, is one of the muscles that forms part of the thigh. Specifically, it originates in the upper and anterior area of the iliac spine. From there, it crosses until it reaches the upper part of the tibia.

In the tibia, it’s inserted in its most internal and upper part. This way, it’s a kind of curve along the thigh that passes behind the medial condyle of the femur until it reaches its point of insertion. This last section is actually a tendon.

It’s part of the so-called goose foot. It’s formed by the distal tendons of the semitendinosus, internal rectus and sartorius muscles. This area is prone to very disabling injuries.

Some people may present variations in the normal position the sartorius muscle is in. This is stated in a study published in the Chilean Magazine of Anatomy. Medical experts should take this into account, especially when performing surgery or treatment.

This is the longest muscle in the human body. When going from the pelvis to the knee, in a certain curve, it usually measures about 55 centimeters (21 inches) in an adult person of medium height. It can even reach 6o centimeters (23 inches).

The femoral nerve carries out the innervation. In addition, the femoral artery passes through it and is responsible for transporting oxygenated blood to the most distal parts of the leg.

What are its functions?

As explained by the Royal Spanish Academy, the word ‘sartorius’ comes from the Latin sartor meaning ‘tailor’. This muscle wasn’t named at random. It comes from the fact that one of its functions is to allow us to cross our legs which is the typical posture used by ancient tailors.

The sartorius muscle is a skeletal muscle of the striated type. That is, it contracts by will, unlike smooth muscles. The latter are part, for instance, of the digestive system, and contract unconsciously.

The main function is leg flexion. If we visualize its disposition, it’s easier to understand. When it contracts, it pulls the lower leg up towards the hip. It also allows other movements, such as rotating our hip outwards or bending our knees. Similarly, it’s part of the internal rotation of the leg or its elevation.

You may be interested in: Learn All about Heavy Legs

Sartorius muscle pain, as with any other muscle group, usually results from traumatic injury or overexertion. In addition, other symptoms may appear, such as swelling, redness or increased sensitivity.

Trauma injuries are those produced by a direct blow to the muscle area. Any blow to the area of the iliac spine or the central or inner thigh can cause this pain. The same happens if it occurs in the goose foot.

When the trauma affects the goose foot, it can damage other movements by damaging nearby muscles. The truth is that, pain and damage from trauma as the one described above aren’t as common as injuries linked to tendinitis or bursitis.

Tendinitis consists of the inflammation of some of these tendons. It can cause limping, pain on the inside, and even inability to move the leg if the pain is very intense.

Bursitis, on the other hand, is the inflammation of the bursa. It’s a fluid-filled cavity, similar to the synovium in other joints. It allows for the cushioning of friction between bones and tendons to reduce the damage generated during movement.

Both injuries are very common in athletes. Especially in runners or in those who perform exercises that produce a lot of impact on this area of the knees.

Injuries due to overexertion or lack of training

Over-exertion consists of training in which the person tenses the muscle, or generates a force that is too intense. In these cases, some of the fibers may break. This over-exertion is often associated with a lack of training.

Other causes of pain in the sartorius muscle

Although rare, pain in the sartorius muscle can occur due to the presence of calcification. This is explained by a study published in Semergen-Family Medicine. This calcification, in turn, comes from a previous trauma.

How can this muscle be strengthened?

Strengthening the sartorius muscle is fundamental. First of all, because strength training provides numerous health benefits, not only on an aesthetic level. For example, it accelerates the metabolism and helps burn more calories at rest.

In addition, the leg muscles support the entire body weight. They allow us to walk and move naturally. The sartorius muscle is responsible for letting us flex our legs and perform rotational movements. This movement is fundamental when we want to bend over.

Therefore, in healthy people , doctors recommend strength training the lower body. Whether in the gym or at home, there are numerous exercises that you can do to help strengthen this muscle. Squats can be one of them.

Stretching is also another fundamental pillar. In the case of the sartorius muscle, to stretch it you must bring the leg to the opposite position. To do this, we recommend you lie on your side on a safe surface. You should extend the upper leg and rotate the hip inwards.

You may like: Three Stretching Exercises to Improve Your Leg Flexibility

Visit your doctor for discomfort in any muscle

It’s important to keep in mind that if any discomfort appears in the sartorius muscle, as in any other muscle, it should be consulted with a specialist. If we let the pain or discomfort pass, it could be an evolving pathology such as tendinitis.

By using a small plastic roll under the thigh we can eliminate tension. You can find this helpful tool in many sports stores. The idea is to place it on the floor and get on top, then roll it over by pressing the thigh.

Lastly, it’s also good to emphasize that you must strengthen and stretch the sartorius muscle frequently. This way, we avoid possible injuries that appear due to overexertion or lack of training.

Want More Toned Glutes and Legs? Try These 5 Exercises
Would you like perfect glutes and legs? Give these 5 exercises a try for great results! Read more »
Link copied!
Interesting Articles
Anatomy and physiology
Why Are Some People More Sensitive to Pain than Others?