The Harmful Effects of the Sun on Your Skin

The harmful effects of the sun on your skin are quite evident when it comes to sunburn, the appearance of spots, and even the dreaded skin cancer. What's more, exposure to sunlight carries different types of risks. You must wear sunscreen and also adopt some healthy habits. 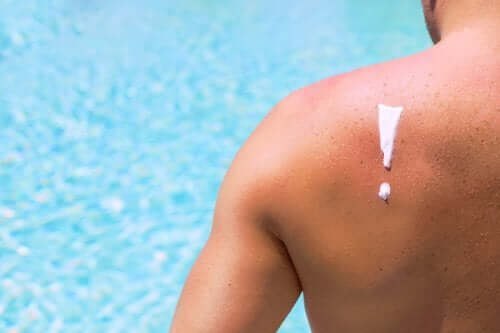 Are you aware that overexposure to the sun can have harmful effects on your skin?

It’s true that the sun is essential for all life on earth and brings many benefits along. For example, it’s absorption by plants leads to their photosynthesis and is also a source of vitamin D in humans. However, your exposure to it must be moderate to enjoy these.

Indeed, sun exposure is healthy in moderation, but there’s a limit beyond which it can be harmful to your skin, eyes, and overall health. The main negative consequences the sun has on a person’s skin range from the appearance of wrinkles and dark spots to burns and premature aging. Some people also have photoallergic reactions and may even get skin cancer.

Let’s see what are the four harmful effects the sun has on your skin because you should know about them.

Harmful effects of the sun on the skin

Almost everyone has experienced the unpleasant symptoms of sunburn at some point during their lives. Perhaps it happened after a sunny day at the beach or in the mountains when they didn’t have adequate skin protection. Who can forget the pain and discomfort you felt at night?!

After a sunburn, your skin becomes red and sometimes blisters and there may even be inflammation. Not only that, but it feels hot and hurts with something as simple as the normal rubbing of the clothes you’re wearing. In some cases, there may even fever and dehydration, and second-degree burns in extreme cases.

The sun’s UV rays are the reason for these burns because they lead to the thickening of the epidermis as a protective reaction of the skin against solar radiation. Generally, symptoms appear a few hours after sun exposure and their intensity varies depending on several factors, mainly on the ability of your to assimilate such radiation.

You may be interested: Eight Tips to Avoid Sunspots

The negative effects of solar radiation are cumulative, even for low-intensity exposures. Premature aging of the skin is one of the most visible effects of too much sun exposure as time goes by. In fact, it’s caused by 90% of your sun exposure. This harmful effect manifests through the appearance of spots, wrinkles, and sagging skin. This is because excessive sun exposure depletes collagen and elastin.

UV rays are also the main reason for this premature aging of a person’s skin when it comes to sun exposure. This is because these rays penetrate your skin and get to the dermis, leading to a rapid and transient pigmentation in the form of melanin which is what darkens your skin.

You must apply sunscreen to your skin all year round in order to avoid these harmful effects of sun exposure. Remember, it isn’t only during summer when the sun could damage your skin, but every time you expose it to sunlight.

The sun is the trigger for hypersensitivity to compounds such as chlorine or other chemicals in this type of allergy.

A sun allergy may seem very strange if you consider that it’s a natural element that’s been present all of our life. However, there are many people with this condition. In fact, it affects an estimated 20% of the world population. This type of allergy is, in fact, related to other kinds of allergies such as those triggered by certain foods, pool chlorine, lotions, medications, and even clothing. Thus, allergic reactions may activate with sun exposure.

You may be interested: Six Tips to Protect Your Lips from the Sun

Skin cancer: the worst of the sun’s harmful effects

Sun exposure can also lead to skin cancer due to cell damage from UV rays. There are several factors involved in the appearance of skin cancer. For instance, it may come from repeated exposure and sunburn, skin phototype, genetic factors, and age, among others.

The areas of skin that are most susceptible to cancer are the most commonly exposed to the sun such as the face, hands, and neck. Sunburns greatly increase the risk of skin cancer. The type of skin is also decisive: people with lighter skin and eyes are at a higher risk.

A family history of melanoma is also a determining factor, and so is age. Thus, people over 40 are at greater risk of developing skin cancer. Melanomas and carcinomas are the main types of skin cancer.

Overall, we hope that you realize how important it is to protect yourself against the harmful effects of the sun. As with anything, prevention is better than a cure!

9 Ways to Treat Sunburns
Both external and internal hydration is important to speed up the recovery of a sunburn, it soothes your irritated tissues and promote skin repair. Read more »
Link copied!
Interesting Articles
Healthy habits
How to Adapt to Climacteric and Menopause