The Different Types of Mastitis and Their Characteristics

Mastitis is a condition that can cause inflammation and pain in the breasts. Often its origin is due to infections caused by breast feeding. However, it can also occur during menopause. In this article we tell you all about it. 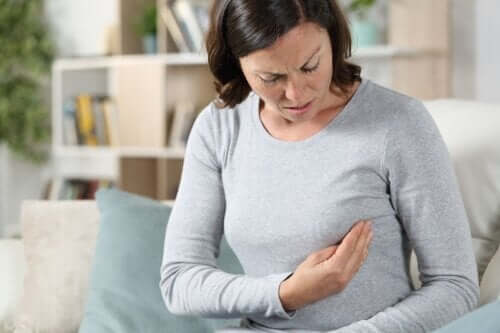 The most worrying part of this is that both the mother and the baby suffer the effects of mastitis. The mother suffers from a psychological and health point of view, and the child because mastitis may lead to a higher risk of death. As such, it’s a problem that we should pay attention to, especially in serious cases.

In this article, we’ll explain what the characteristics are for each type of mastitis and how you can treat it.

There are several definitions for mastitis. In the majority of them, the words inflammation and infection of the mammary glands are used.

This is a condition that usually affects women that are breastfeeding. However, there’s also a form of mastitis that occurs in those that aren’t.

Treatment, therefore, depends on the cause. Typically, this infection is due to milk retention. Maternal milk contains substances that, if kept for a prolonged amount of time in the mammary gland, can lead to inflammation and infection.

The rate of developing this condition is relatively high: about 10% of all women that breastfeed suffer from mastitis. Furthermore, although it’s almost always present in just one breast, it can be present in both. Generally speaking, it typically occurs in the first three months after the baby is born, between the second and the third week.

Mastitis usually occurs when breast feeding due to infections.

You may also like: Breast Pain and the Menstrual Cycle

As we’ve already mentioned in this article, there are several types of mastitis. The most common types are typical, subacute/subclinical, and recurrent. There are also other less frequent types like tuberculous and granulomatosa.

Typically, mastitis is characterized by the full development of infection. As such, it presents a clinical picture with several characteristic symptoms. Among these symptoms we can observe the following:

The treatment for typical mastitis depends on the specifics of the infection and symptoms. In this sense, specialists usually recommend a course of 7 to 10 days. They may also recommend the use of analgesics, anti-inflammatory, or antipyretic agents.

Next, let’s take a look at the different types of mastitis.

Types of mastitis: Mastitis in women who aren’t breastfeeding

Not all types of mastitis occur as a result of breast feeding. In fact, in some women, it develops after reaching menopause.

What to do if you think you may be developing mastitis

If a woman is breastfeeding and suspects she may have mastitis, she should visit a medical professional. However, this doesn’t mean that she should stop breastfeeding. On the contrary, breastfeeding can have a positive effect. If necessary, the woman can also extract the milk using some kind of device.

Here are some other general recommendations that are good to follow:

Not treating mastitis in time or adequately can lead to complications. For example, if a milk duct is blocked and there’s an accumulation of pus in the breast, it may need to be medically drained. If that is the case, you should seek medical attention immediately.

The Causes of Alcoholism: Consequences and Treatment
Alcoholism is the excessive consumption of alcohol, where one loses control over how much they drink. Find out the causes and consequences of alcoholism. Read more »
Link copied!
Interesting Articles
Illnesses
Perineal Tears: What They Are and How to Recover from One