Breast Pain and the Menstrual Cycle

Breast pain is a very common symptom that doesn’t usually imply the presence of disease. How is it related to the menstrual cycle? Read on to discover the answer! 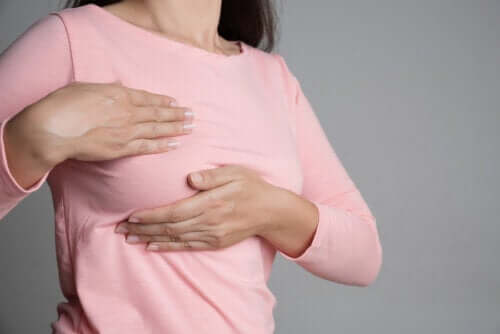 Mastalgia is defined as breast pain. Unfortunately, many women experience it, especially during premenstrual syndrome. Menstruation is influenced by many different factors. In fact, there’s a relationship between breast pain and the menstrual cycle.

It’s common in young women and disappears with the onset of menopause. Approximately 70% of women have experienced it sometime in life. Learn more about this common symptom during menstruation.

What’s the relationship between breast pain and the menstrual cycle?

The menstrual cycle is nothing more than a process that is carried out by the countless hormones that determine how and when the cycle will take place. In this sense, mastalgia is one of the most common symptoms in the different phases of the menstrual cycle.

Usually, it appears during the second half of the cycle (after ovulation, known as the luteal phase) and disappears at the beginning of the menstrual period. During the menstrual cycle, hormonal changes like the following take place:

To understand it better, the hormonal changes that occur during this phase cause inflammation, swelling, and enlarged breasts, which is painful on many occasions. Also, if the woman becomes pregnant (which keeps progesterone levels high) they’ll stay swollen.

Biologically, the breasts have a greater number of receptors for these substances, which makes them hormone-dependent glands. To a large extent, the breasts react more to hormones than the rest of the body.

You may like this article: Mastalgia: Description and Causes

Breast pain is mostly related to premenstrual syndrome (the week before menstruation) or benign breast changes (for example, fibrocystic breast disease). Although these are the most common causes, there are some risk factors, such as:

Breast pain doesn’t have to be a sign of breast cancer. Only 10% of cases of malignant breast tumors cause mild pain.

There’s a difference between breast symptoms related to the menstrual cycle and those that don’t develop due to cyclical processes.

Breast symptoms influenced by the menstrual cycle are the most common cause of breast pain and are known as premenstrual syndrome. As we already mentioned in this article, they’re caused by hormonal changes that are characterized by the following:

Unlike cyclical pain, other causes can lead to breast symptoms. One of them is usually trauma or benign diseases, such as those we mentioned above. The typical symptoms of non-cyclical breast pain (not common) include the following:

When to consult a health professional

In general, any non-cyclical cause should be studied. Thus, we recommend you go see a doctor or gynecologist if you suffer from any of them. In addition, you need to be more vigilant if you present any of the following symptoms:

In short, breast pain is usually associated with the menstrual cycle and the hormonal changes that occur during it. In rare cases, it’s a warning sign of a serious problem. Nevertheless, you need to be alert, especially if the pain is prolonged and severe.

7 Possible Causes of Your Breast Pain
Although it might not be related to a dangerous condition, if you’re experiencing breast pain it’s important that you visit your doctor. Read more here! Read more »
Link copied!
Interesting Articles
Health and sexuality
Which Hormones Influence the Menstrual Cycle?