The Characteristics and Effects of Vasopressin

Although the main function of vasopressin is to regulate the activity of the kidneys, it also has some influence on the cardiovascular system and the central nervous system, among others. 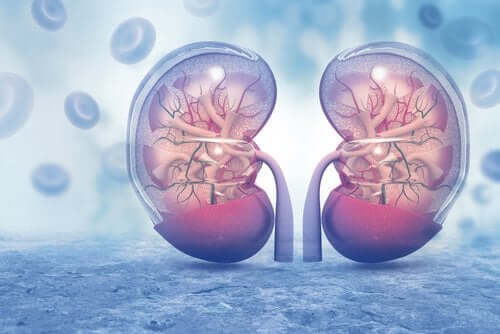 Vasopressin, also known as antidiuretic hormone or ADH, comes out of the hypothalamus’s magnocellular nuclei. From there it passes to the neurohypophysis and then finally into the blood system. It helps regulate the amount of water in the body by controlling the amount of water the kidneys excrete. In this article we’ll be looking at the different characteristics and effects of vasopressin.

It’s an oligopeptide formed by the union of 9 amino acids. The amino acids that make up this hormone are cysteine, tyrosine, glutamine, proline, an amino group, phenylalanine, arginine, asparagine, and a carboxyl group.

The function of vasopressin

Even though its main function is to regulate the activity of the kidneys, it also has some influence on the cardiovascular system and the central nervous system, among others.

This hormone comes out in response to the hypertonicity of body fluids. This helps the kidneys reabsorb water and return it to the blood from the tubules of the nephron, normalizing the tonicity of the body fluids.

As a consequence of the renal reabsorption of water, the urine becomes more concentrated and thus it decreases in volume. So, when vasopressin comes out in high concentrations, it can increase blood pressure as it induces moderate vasoconstriction.

The effects of vasopressin

Its action on the kidneys refines a series of processes that concentrate the urine. By promoting such concentration, vasopressin produces the net reabsorption of free water to the extracellular fluid.

Discover: What is the Hormone Oxytocin?

The antidiuretic hormone released from hypothalamic neurons has to do with the regulation of blood pressure and temperature. There’s evidence that this hormone may have analgesic effects, which depend on sex and stress.

Vasopressin is a potent vasoconstrictor and can profoundly increase systemic vascular resistance, which explains the hormone’s original name “arginine vasopressin.”

How does ADH regulate itself?

Receptors in the heart and large blood vessels detect low blood pressure or a decrease in blood volume. This occurs when there’s bleeding, or during dehydration. So, under these circumstances, they stimulate the release of vasopressin.

The antidiuretic hormone also releases by thirst, nausea, vomiting, and pain. Thus, it acts to maintain the volume of fluid in the bloodstream during times of stress or when there are injuries.

What happens if there’s excess vasopressin?

High levels of this kind of hormone promote water retention in the body by the kidneys. There’s a condition called syndrome of inappropriate antidiuretic hormone secretion.

In patients suffering from this syndrome, an excess of vasopressin releases when they don’t need it. So, it results in excessive water retention that dilutes the blood, giving a characteristically low salt concentration.

Excessive levels of this antidiuretic hormone can happen due to the side effects of medications, and lung, chest wall, hypothalamus, and pituitary gland diseases.

You may also be interested: What’s a Pituitary Adenoma?

What if there’s almost no vasopressin?

Vasopressin is positioning itself as an excellent therapeutic alternative alone or in combination with other vasopressors in the daily practice of intensive medicine.

What to Do About Medication Poisoning
When medication poisoning occurs, its degree will depend, among other things, on the amount of drugs ingested and on the characteristics of a person. Read more »
Link copied!
Interesting Articles
Anatomy and physiology
Twelve Exercises to Overcome Shoulder Tendinitis