What is the Hormone Oxytocin?

Oxytocin is known by many names: the hormone of pregnancy, childbirth, and orgasm. But what processes do its receivers intervene in? 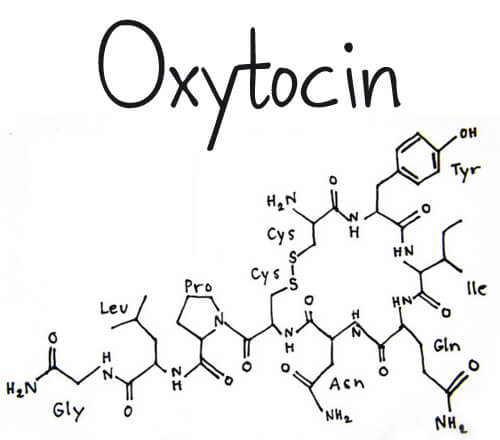 What is the hormone oxytocin?

Oxytocin is known for inducing labor and intervening in breastfeeding. Overall, it’s made up of 9 amino acids, including cysteine, tyrosine, isoleucine, glycine, proline, and asparagine. It’s located in the posterior pituitary gland and is highly involved in various physiological processes.

Its chemical composition is similar to its counterpart hormone, vasopressin, which is located in the anterior pituitary gland and has several functions.

As with any organic substance, oxytocin has various receptors which are mainly found in the:

Particularly, oxytocin has functional characteristics that make it the hormone of pregnancy because of its behaviors in several processes at a physiological level.

What Does Oxytocin Regulate?

First of all, this hormone has an excellent function in the female reproductive system. For one, it actually induces and increases the speed of labor.

Normally, the body releases high amounts of oxytocin as the labor progresses. Plus, its levels are even higher when there is nipple stimulation in the woman in labor. High oxytocin levels generate contractions of the myometrium, facilitating the physiological extraction of the fetus.

On the other hand, this hormone acts directly on the erectile tissue in both the corpus cavernosum and the corpus spongiosum in the male reproductive system. Thus, this hormone is also associated with ejaculation through the ejaculatory duct and urethra.

In addition, the hormone oxytocin induces contractions in the myoepithelial cells of the mammary gland. Thus, it intervenes in milk production through the Montgomery glands. Overall, this facilitates the breastfeeding process during stimulation in the areola by the newborn.

In addition, urinary retention caused by the hormone oxytocin is closely related to molecular events in the basolateral membrane of the kidney.

Typically, this symptomatic hyponatremia occurs more frequently in pregnant women whose labor was induced with oxytocin.

Naturally, oxytocin receptors in the uterus for childbirth have a direct dependency on the body’s levels of this hormone. In the early stages of labor, the best starting dose is between 1 to 6 mU/min. Then, it increases by 15 to 60 minutes.

From that moment, the receptors will have a greater hormonal affinity for oxytocin. Thus, it improves the contractions to facilitate labor.

Naturally, the mother-child relationship begins right after birth. Believe it or not, both the natural and artificial synthesis of oxytocin generates this.

Overall, oxytocin strengthens the mother-child relationship. A curious fact is that this same substance causes women to forget the pain of childbirth. That way, they won’t fear having more children in the future.

Side Effects of the Hormone Oxytocin

Like all synthetic hormones, oxytocin is not harmless and can cause adverse effects during its administration. Overall, these include:

Overall, doctors have noticed the adverse reactions involved with high oxytocin levels in the body in stimulated patients. Despite this, they facilitate contractions during labor.