Sepsis in Infants and Children: Warning Signs and Symptoms

Sepsis in infants and children is a serious disease that can be life-threatening if it isn’t treated. As children, especially young ones, can’t recognize that they’re sick, adults must learn to identify its symptoms. 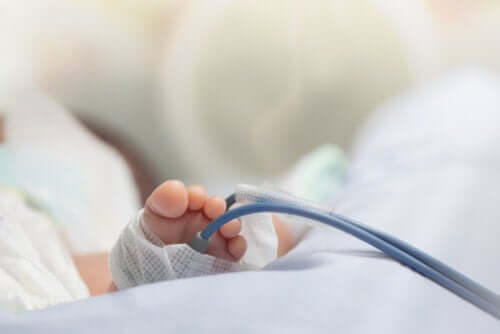 Sepsis in infants and children is a serious disease that can lead to death in some cases. It’s a medical emergency that must be treated as soon as possible, as time is of the essence. For this reason, it’s very important to know the warning signs of this disease.

Those with weakened immune systems are most at risk. This serious condition occurs more often in older adults, people with chronic illnesses, and those who’ve suffered significant physical trauma.

Sepsis is also called systemic inflammatory response syndrome (SIRS). It occurs when the body reacts disproportionately to an infection. Although anyone can get SIRS, sepsis in infants and children has its peculiarities.

Firstly, it usually causes a release of chemicals into the bloodstream to fight infection. The effect is inflammation throughout the body. As a consequence, tissue and organ damage occurs. This could lead to multi-organ dysfunction.

This abnormal immune system response affects cardiovascular, neuronal, hormonal, energetic, metabolic, and coagulation functions. In the most extreme cases, it leads to death.

Types and forms of presentation

Experts classify sepsis based on its severity, the number of affected organs, and the way the body responds to the drugs the doctor prescribes. These are the types of sepsis that exist:

In the case of sepsis in infants and children, this condition is classified into two main types:

Warning signs of sepsis in infants and children

Sepsis in infants and children is a serious health condition that can be treated. The important thing is to go to the doctor’s as soon as possible. Early detection of this condition often makes the difference between life and death.

In most cases, sepsis is preceded by an infection, which can be localized to the urinary tract, skin, bones, or lungs. We should note that premature babies and those born with low birthweight are more likely to suffer from sepsis. Age represents a risk factor.

The main symptoms are the following:

Likewise, you must watch out for a series of warning signs. All of them suggest a serious condition, which a doctor must treat as soon as possible.

If more than one of these signs and symptoms happen together, you should immediately seek medical help. When the child is weak, in discomfort, or seems sick, the diagnosis and approach must also be accelerated.

Dry diapers for more than 12 hours in babies is another sign of seriousness, as it indicates dehydration and the body’s efforts to retain fluid. This is related to a drop in blood pressure and reduced blood flow to the kidneys.

You should also read: Urinary Sepsis: Causes and Treatments

Prevention of sepsis in infants and children

There are two ways to prevent sepsis in infants and children:

The World Health Organization (WHO) released a series of recommendations to help each family prevent sepsis, particularly in babies and children. We should mention that this disease affects three million newborns and 1.2 million older children each year.

The main preventive measures are the following:

As for health personnel, the WHO advises them to comply with the five moments that call for the use of hand hygiene. Likewise, they should keep their work environment sanitized, periodically request infection control equipment, and implement infection prevention protocols each time a patient is treated.

Why Is It Important to Treat a Urinary Tract Infection Early?
....occurs about 30-35 times more in women than in men. However, few are aware of the complications if you don't treat a urinary tract infection in time. Read more »
Link copied!
Interesting Articles
Children
Home Remedies for Gastritis in Children

Asthenozoospermia is defined as reduced sperm motility. It’s also known as asthenospermia, or more commonly known as lazy or slow…

During pregnancy, pregnant women should limit medication intake as much as possible and strictly take only those prescribed by their…