Meningococcal sepsis is a serious condition caused by the spread of meningococci in the bloodstream and various organs. It results in the formation of thrombi that can lead to gangrene and other complications. 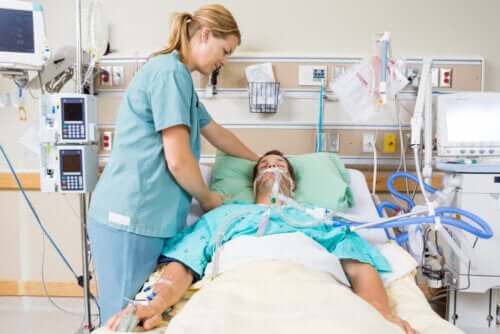 Meningococcal sepsis is a medical emergency and requires immediate treatment. It’s a rapidly progressing disease that can lead to shock and the simultaneous failure of several organs in the body.

This condition stems from a meningococcal infection. The World Health Organization (WHO) estimates there are around 500,000 new such infections per year. In fact, between 20 and 50% of those who develop meningococcal sepsis die.

This condition is due to meningococcus, a bacterium that causes serious diseases. Anyone can acquire it after contact with the droplets an infected person expels when coughing or sneezing.

Some individuals are highly sensitive to these bacteria, but science doesn’t know why. What we do know is this microorganism progressively invades the nasopharynx. Furthermore, the interval between infection and the appearance of symptoms is about 10 days, although it may be less.

Then, the meningococcus penetrates the mucosa and enters the bloodstream. The most common manifestation of this type of disease is meningitis or inflammation of the meninges — the membranes that cover the brain and spinal cord.

One of the possible effects of this disease is the development of meningococcal sepsis — a serious condition, with a high mortality rate. Likewise, those who survive it may have permanent sequelae.

Keep reading: What is Meningitis?

This condition is a form of septic shock. The latter is a medical condition in which the tissues and organs don’t receive enough oxygen and nutrients. This leads to the gradual death of cells and a general failure that can lead to death.

Then there’s the multiplication of meningococcus in the blood. This excess leads to clots that hinder circulation in one or more organs or extremities, causing gangrene. Paradoxically, difficult-to-control hemorrhages also occur.

Estimates indicate that one in four people with this disease will require the amputation of a limb. Likewise, sepsis causes skin lesions that generate scars and lead to deformities. These often require surgery and the healing process is rather slow.

The symptoms of meningococcal sepsis are broad. At first, there may be a mild fever and yet there’s also multi-organ failure and death within hours, in many cases.

Typically, symptoms common to those of any viral infection appear such as fever, chills, dizziness, nausea, headache, and weakness in the first four to six hours. There may also be diarrhea and vomiting.

In addition to these above, the most common symptoms of sepsis are:

Meningococcal sepsis can happen with or without meningitis. Typically, the diagnosis is made from a blood test, nasal, and jaw swab, chest X-ray, and stool sample.

Treatment of the disease must take place in a hospital or medical facility and doesn’t require isolation. The conventional approach includes the following four measures:

You may also be interested in Urinary Sepsis: Causes and Treatments

This is primarily about preventing the spread of meningococcal disease. Thus, there are two vaccines available for this purpose:

Vaccines don’t protect against all types of meningococci. However, they greatly reduce the distribution of the bacteria most associated with the problem. Finally, other prevention guidelines are: limiting contact with sick people, frequent hand washing, and proper hygiene of objects for personal use.

World Meningitis Day: A Disease that Has a Vaccine
World Meningitis Day is celebrated every April 24 to shed some light on this disease. The good news is that there’s a vaccine to prevent bacterial cases. Read more »
Link copied!
Interesting Articles
Illnesses
Risk Factors for Mouth Cancer