A lot of Red Spots on Skin: Should You Be Worried?

Red marks don't usually spell problems for your health, unless they're accompanied by discomfort, itching, or bleeding. In these cases, you must always consult with a specialist. 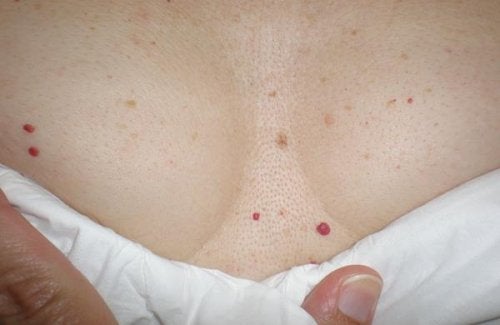 We’re sure that, more than once, you’ve been surprised to find a few red spots on your skin. Known as red moles or “ruby spots”, they often appear suddenly and never go away. It’s common for us to be concerned when we notice them, and when we find that more have appeared from one day to the next.

Despite the name, red moles aren’t actually moles at all. Known as angiomas, these red spots are made up of clusters of capillaries. They may also be called Campbell De Morgan spots or cherry angiomas.

According to a study published in American Family Physician, this problem affects up to 50% of adults. They tend to appear on the trunk of the body and the extremities, and often measure several millimeters in diameter. In most cases, no treatment is required, but it’s always worth getting them checked out by your doctor.

What else must you know? To better understand them, we’ll tell you the most important things you need to about the development of red moles. If you’re suffering from angiomas, this information should help to clear up any doubts you may have.

According to an article published in “Medicina General y de Familia”, red spots on the skin are the most common form of angioma. These natural, benign skin lesions can appear at any time throughout your life, though they are more common after the age of 30.

They usually attract our attention with their red color. Many people consider them unsightly, and resort to treatments to remove these angiomas, the genetic tendency for which we inherit from our parents. Let’s take a look at more facts.

You should also read: Birthmarks and Moles: Why Do They Appear?

What are red spots on the skin exactly?

Red spots on the skin are the dilation of capillaries due to small ruptures in the vascular system. They often appear on the arms and chest.

Typically, cherry angiomas present as small red spots on the skin. They may be smooth, or slightly raised, and can vary from 1-5 mm in diameter. Their appearance often leads people to mistake them for moles.

We should also point out the following: angiomas are benign tumors. They’re simple accumulations of melanocytes which, unlike moles, rarely become malignant.

To date, the exact cause of angiomas is unknown. However, according to a study published in the American Osteopathic College of Dermatology, age is a factor, and people tend to develop more as they get older.

However, they have also been linked to genetics, hormonal changes, exposure to chemical products, and climate.

Discover: Skin Cancer Warning Signs and What to Do About Them

Should I be worried?

We should stress, once again, that these red spots on the skin aren’t cancerous, and are no real cause for worry. They’re benign tumors, but we still need to pay attention to their appearance, and look out for any changes. Thus, if you have these imperfections on your skin, it’s important to remember the following:

What can I do to remove them?

Despite not presenting any risks to your health, some view these small marks as undesirable, especially when they want to wear a tank top or a shirt with a low neckline.

Are you worried about red spots on your skin? As you can see, they’re usually superficial. However, if you do notice any abnormalities or complications, get them checked out by your doctor.

Link copied! Next
Interesting Articles
Anatomy and physiology
The Causes of Stained Teeth