Rectal Bleeding: Why Does it Happen? 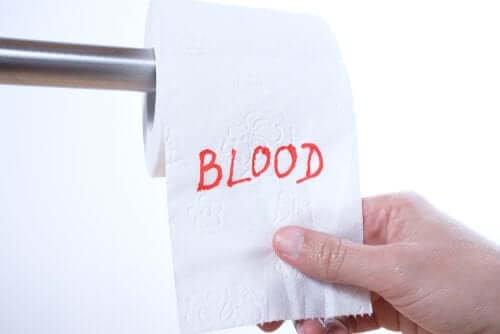 Rectal bleeding can be quite scary. This is because almost everyone knows it’s one of the symptoms of colon cancer. However, finding blood when going to the bathroom can be due to many other reasons. Not all of them are serious.

Norberto Mañas, a specialist at the digestive unit at the Hospital Clinico de San Carlos in Madrid, points out:

“It’s normal to be alarmed, because blood is gory. The first thing you often think about when you bleed is that something is wrong. However, the most frequent reason for rectal bleeding isn’t necessarily due to something bad. However, that’s no reason not to run it by your doctor, especially if you’re over 50 years old.”

Due to its frequency and possible seriousness, we’ll explain the main causes of rectal bleeding in today’s article.

How does blood appear in the stool?

Blood in the stool happens for many reasons. In fact, on numerous occasions, it may not even be visible to the naked eye. The main ways to notice it are:

As we mentioned above, the most alarming reason is colon cancer. However, it’s not the only situation in which blood may appear in your stool. Other causes are:

If you have rectal bleeding

As you can see, rectal bleeding can have many different causes. Also, it isn’t always easy to diagnose, so it could be a lot more serious than you think. Therefore, you should always consult your doctor.

Make notes so you can provide them as much information as you can about any changes in your stool. Write down the color, frequency, and form of bleeding as these facts are very important for a proper diagnosis. This is why doctors often recommend looking at your stool.

Similarly, you should do a stool test periodically if your above 50 years old. Doctors can do a test with a strip. The goal is to detect hidden blood that isn’t visible to the naked eye. Likewise, they might also do a rectal examination as it helps them detect any hemorrhoids and tumors in it. Also, it’s good for detecting prostate problems. It’s an uncomfortable test, but worth the peace of mind.

Colonoscopies are the most effective tests to rule out colon cancer. Depending on the type of blood in your stool, they may do other diagnostic tests such as gastroscopy, radiography or scintigraphy.

You may be interested: The Diet and Preparation Before a Colonoscopy

What Causes Mucus in Stool?
The digestive system has several membranes throughout the intestines. These membranes are responsible for secreting mucus to completely lubricate the digestive tract. At the same time, the mucus secretion ensures an easy evacuation of waste. Read more »
Link copied!
Interesting Articles
Beauty
Things to Consider for the First Time at the Spa