Prospantus syrup contains a special Hedera helix extract, which can be a comprehensive treatment for different cough-related illnesses. 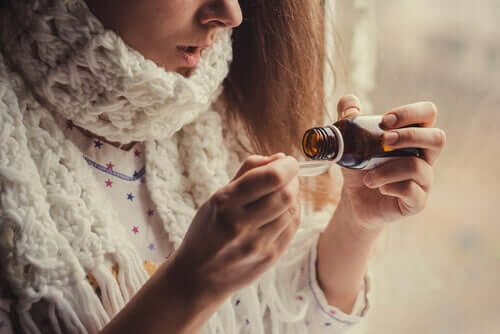 Prospantus syrup is a syrup with mucolytic and expectorant action. It’s made of the dry Hedera helix extract. In addition, it’s used to treat coughs since it helps get rid of mucous.

The Hedera helix is a medicinal plant called common ivy. People have used its extract since ancient times to treat illnesses where you need to eliminate phlegm from the respiratory tract.

What is Hedera helix?

Ivy is a climbing medical plant that belongs to the Arialaceae family. It grows on several continents, and can be several feet high.

This plant has dark green evergreen leaves; its flowers are greenish-yellow in color and smell nice. Also, it grows fast and adapts easily to lots of different climates and terrains.

Among the many benefits this plant has, its ability to eliminate mucous stands out. In addition, it can transform a dry cough into a productive cough to get rid of phlegm. For this reason, it’s been a common cold treatment since ancient times. They would use it to heal the respiratory tract and relieve coughs.

In this plant, there are different active components. Each of these active ingredients helps the respiratory tract. Some of these components of ivy are:

Due to its composition, ivy extract has bronchodilator and expectorant properties and effects. Therefore, people use its leaves to treat respiratory conditions with coughs.

However, although it has lots of properties to alleviate respiratory problems, the fruits are very toxic to people.

The ivy extract in Prospantus is obtained through a proprietary extraction process. Also, it’s important to know that the effectiveness of the ivy in the syrup has to do with how they collect it.

Thanks to the fact that the ivy in Prospantus follows a patented harvesting and extraction process, the extract has unique properties. In addition, the packaging contains a seal that identifies and refers to the patented extraction method.

Due to its properties, the special extract of Hedera helix EA 575® helps treat illnesses related to coughing. The components of ivy extract help dissolve mucus and reduce bronchial spasms, which relieves the need to cough.

Currently, researchers know that part of the effects of Prospantus are mainly due to a-hederin, one of the active principles of the extract in the syrup.

How does Prospantus syrup work?

Prospantus syrup fights the three most common symptoms of cough. Therefore, it has three main actions:

Indications and dosage of Prospantus syrup

As we mentioned, this syrup treats cough, and anyone over the age of 2 can use it. Here are the guidelines based on age:

Prospantus syrup is a safe and natural option to treat coughs because it helps clear bronchial secretion and relieve inflammation in the airways.

If you have any doubts, talk to your doctor or pharmacist. If your cough doesn’t go away in a few days, it might be a sign of a different condition or problem. You may need a prescription for a different type of medicine.

How to Make Three Expectorant Cough Remedies
Its common for that bothersome mucus to appear whenever you have a cold or the flu. To treat this condition, natural expectorant cough remedies can help! Read more »
Link copied!
Interesting Articles
Medication
Progestin-only Birth Control: Benefits and Side Effects