Oregano essential oil is linked to respiratory health, so it's often used in folk medicine to treat colds and flu. We'll tell you how to make it and what the possible benefits are in this article. 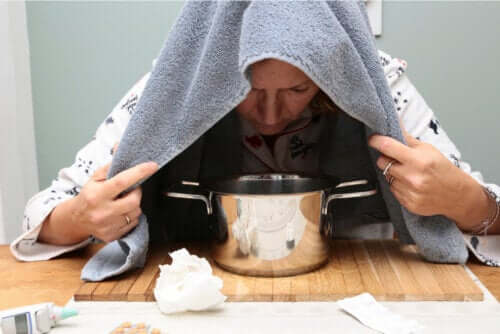 Oregano is an aromatic plant that belongs to the mint family. Oregano essential oil is popular thanks to its antiviral, antioxidant, and anti-inflammatory properties. Traditionally, many people use this oil for respiratory health and to treat colds and flu.

The oil is obtained from various parts of the plant and is consumed in different presentations. Most of these are found in health food stores as supplements, dye, or aromatic essential oil. The latter is for external use and aromatherapy.

Discover how to use it, as well as the benefits and contraindications of oregano oil to treat the symptoms of cold and flu.

The benefits of oregano essential oil

Oregano contains several compounds with properties that are beneficial to human health, such as rosmarinic acid, thymol, and carvacrol. This composition is the basis that provides positive effects, among which are the following.

According to an ongoing study, oregano can fight bacteria such as Staphylococcus aureus, one of the most common causes of food poisoning and skin infections. Also, the oil may help fight some antibiotic-resistant bacteria.

2. It helps with cholesterol reduction

Oregano essential oil may lower cholesterol, according to a scientific study. Those who received the treatment increased their good cholesterol level, while bad cholesterol was reduced compared to those who only practiced diet advice.

A study with other similar herbs showed that oregano contains 3 to 30 times higher levels of antioxidants when compared to thyme, St. John’s wort, and marjoram. The antioxidant content of oregano oil is higher than that of some fruits and vegetables.

Oregano can improve intestinal symptoms caused by parasites, such as swelling, pain, and diarrhea.

According to one study, all participants experienced a reduction in the presence of invasive organisms and a high percentage were cured. Also, it could be useful against the condition known as leaky gut.

5. It has anti-inflammatory properties

A study in progress reveals that the oregano essential oil can reduce inflammation thanks to one of its components, carvacrol. Despite advances, more human research is needed.

6. It may treat fungal infections

Studies have shown that oil of oregano is effective against five different types of Candida, a fungus that affects the mouth and intimate area. It’s considered even more effective than other proven oils. Candida is found in the form of yeast and causes infections when it grows too much.

An ongoing study found that oregano essential oil had similar effects to commonly used painkillers such as morphine. This property is due to one of its substances called carvacrol, however, human studies are still needed to prove its full effectiveness.

8. It may help with weight loss.

According to research, oregano oil may help with weight loss because carvacrol could reverse the chain of events that form fat cells. However, there’s still no conclusive evidence in humans.

How to use oil of oregano to treat a cold

Thanks to the properties of oregano oil, it can help fight bacteria, relieve congestion in the airways, and also serves as an anti-inflammatory. In the case of colds, the two most common ways to use it are inhalation and gargling.

Steam inhalation with oil of oregano

For cases of a sore throat

How to use it to treat bronchitis and a cough

Another of the properties of oil of oregano is its potential as an expectorant. It dilutes the mucus, relieving the symptoms of bronchitis. There are two ways to treat it.

How to do a steam inhalation

How to apply the oil of oregano to the chest

Contraindications of oil of oregano

Be careful not to take an excessive dose of oil of oregano. You need to know that it’s elaborated with a high concentration. If you take too much or use it for a long enough period of time, this thymol content could produce adverse effects.

Among the most common side effects are skin and eye allergies, nausea and vomiting, dyspepsia, and skin rashes. There is still a lack of scientific research to support its use in pregnant women and children, so it’s best to avoid this oil in both cases.

Read also: How to make and use lavender oil

Use oregano oil for colds carefully

The benefits of oil of oregano are beneficial. It even has antioxidants in higher amounts than some fruits and vegetables. However, remember that more extensive studies are still needed to fully understand its function.

Oregano oil can be used to relieve some common health problems (colds and flu), but you must take or apply the proper doses. Read the manufacturer’s recommendations for more information.

How to Use Pine Oil to Alleviate Cold Symptoms
Pine oil has antiviral and anti-inflammatory properties. Due to this, using it for aromatherapy or in topical treatments can help alleviate cold symptoms. Read more »
Link copied!
Interesting Articles
Medicinal plants
Nux Vomica: What You Need to Know