Apple cider vinegar has antimycotic properties, which helps stop nail fungus. You should keep your feet dry to prevent it and also apply foot powder if necessary. 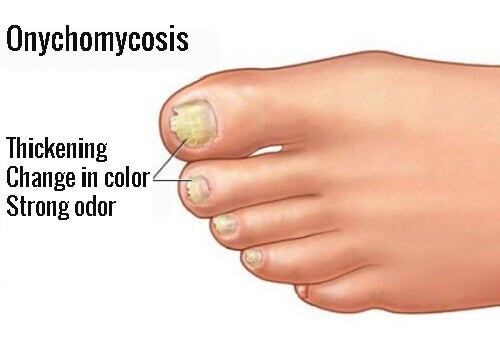 While most people know it as nail fungus, its scientific name is onychomycosis. This infection changes the appearance of the nail with regards to color and thickness. Learn more about the causes, symptoms, and treatments for nail fungus in today’s article.

Causes and symptoms of nail fungus

This is a very common disease all around the world. It starts with one finger or toe and can spread to the rest over time if you don’t treat it. Some people also end up getting athlete’s foot if the fungus starts to infect their skin.

You can mainly spot onychomycosis through changes to your nail, whether in color or thickness, because it doesn’t have symptoms of pain or discomfort. A lot of people take too long to apply treatments to nail fungus and it ends up taking months or years to completely gid rid of it.

Onychomycosis is usually an aesthetic problem. But in more serious cases it can cause chronic pain that’s hard to resolve. As always, early diagnosis makes it easier to stop this from becoming so severe and getting rid of it fast.

There are three types of fungus that can cause onychomycosis. Candida albicans is one of the better-known ones. It spreads through direct contact and can live in your nails without causing an infection for a long time. But there are certain things that weaken your immune system and increase your risk of infection.

Aging is one of the big causes. Fungus can start to form with as you get older because your body’s defense system weakens. It can also happen if your foot is constantly moist, which it often is with swimmers or people who don’t use appropriate footwear (rubber shoes, nylon socks…). Conditions like psoriasis, athlete’s foot, etc, are also potential causes.

Diabetes also has a link to onychomycosis because it affects the body’s defenses. Onychomycosis is more likely to occur if you have a family history of it. This could either be because of a genetic predisposition, or simply from sharing the same towels, tubs, footwear, etc. Lastly, immunosuppression and biological drugs can also lead to nail fungus.

Treating Diabetes with Stevia and Cinnamon

In general, the main issue with nail fungus is aesthetic. Here are five different signs that you might be dealing with this annoying infection:

Hygiene is also extremely important in preventing an outbreak and avoiding the spreading of fungus and bacteria. Always thoroughly wash and dry your hands. Use proper cotton socks that aren’t too tight and allow proper air flow. Avoid showering barefoot in changing rooms and gyms, and don’t share a towel with someone who has it.

If you have onychomycosis, keep your nails trimmed so they don’t grow longer than the tip of your finger or toe. You need to disinfect any clippers or tools after you use them. Don’t paint your nails, and don’t use fake ones.

Home remedies you can use as treatments for nail fungus

Cover the affected area with this mixture with a cotton ball or a brush (that you don’t use for anything else). Allow it to settle for 15 minutes and brush it with a toothbrush on the nail. Once the foot is clean and dry, apply some tea tree oil drops to the nail.

Another common treatment for nail fungus is apple cider vinegar. Prepare a foot bath with equal amounts of vinegar and warm water. Submerge feet and hands (or at least soak the nails) for 20 minutes. Thoroughly dry with a towel or hair dryer, focusing on the affected nail and the area between the fingers and toes.

One of the simplest treatments for nail fungus involves mixing baking soda and water into a paste. Apply this mixture with a cotton ball and spread it over and under the affected nail. Let it sit for a few minutes, rinse, and dry the nail.

Put two cups of water and three spoonfuls of thyme into a pot. Boil for five minutes. Turn off the burner, cover the pot, and allow it to cool. Soak a cotton ball or rag and cover the nails with onychomycosis.

Boil one liter of water with ten pieces of cinnamon. Lower the temperature and cook for five minutes. Let sit for 45 minutes and pour into a container while still warm so that you can soak your nails.

Soak a cotton ball with the juice from an onion. Apply it to the nail fungus. You can also rub half of the onion directly onto your foot.

Mix together a spoonful of lemon juice, five drops of hydrogen peroxide, and two spoonfuls of aloe vera gel. Place this on the affected nail and allow it to dry.

This is the last of the treatments for nail fungus we have for today. Boil five cloves of garlic in a cup of water. Pour into a container with cold water and submerge your feet for 15 minutes. Repeat this every day for a month.

Effective Ways To Prevent Toenail Fungus
Good hygiene and adequate shoes are fundamental in preventing the proliferation of toenail fungus. Also, the feet should be kept dry most of the time. Read more »
Link copied!
Interesting Articles
Beauty
Can Cosmetics Irritate the Skin?