Normal Prolactin Levels and Why They Can Change

Prolactin is a very important hormone for pregnancy and lactation. Here, we'll explain what normal prolactin levels are and why they might change. 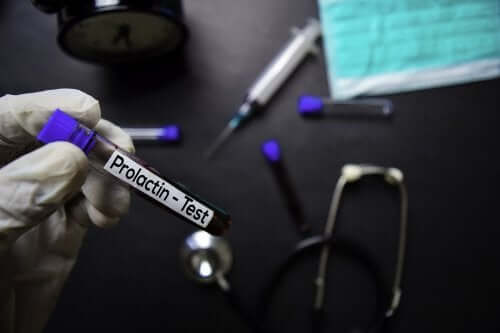 Prolactin is a peptide hormone, which means it has the structure of a protein. Through the union of various amino acids, it forms a more complex hormone. In fact, it has the power to cause changes in the body. Here, we’ll explore what normal prolactin levels are.

The cells that make it are called lactotrophs, because prolactin mainly stimulates milk production in the mammary glands. Additionally, it plays a role in the monthly menstrual cycle.

In fact, this hormone wasn’t known in the medical world before 1928. However, it’s considered to be the oldest hormonal substance in the animal kingdom. This is because it’s in several species like insects and fish.

The amount of this hormone regulates with a positive feedback mechanism. In other words, the more stimulus there is, the more the cells create it. For example, when a mother is breastfeeding, nerves send signals to the pituitary gland to make more prolactin.

What is prolactin for?

In women, prolactin is linked to the production of milk in the mammary glands. Then, the hormone instructs the breasts to make lactose, casein, and lactalbumin; proteins that make up breast milk.

Prolactin starts to increase in quantity in the pregnant woman’s body before delivery. However, other hormones, like progesterone, prevent the milk from coming out. Then, after delivery, progesterone levels drop, and prolactin can act freely for lactation.

On the other hand, in men, prolactin works on the adrenal gland. It’s not a very noticeable effect from what we know now in science. However, it could be involved in the refractory period in men after having sex.

Check this out: 5 Remedies to Regulate Hormones Naturally

Like all substances that circulate in the human body, we know that prolactin has optimal functioning values to do what it has to do. These values vary:

In non-pregnant women, prolactin greater than 100 ng/mL requires intensive testing to find out the reason for the exaggerated size increase. In general, the most frequent causes are using certain medications and having small benign tumors in the pituitary gland.

The biochemical test to know the prolactin levels is through a blood draw, so it’s not very complicated. However, not everyone needs to check for this hormone. On the other hand, we do know that these people should:

The most common change in prolactin levels is increased prolactin in the blood. This is called hyperprolactinemia. If it happens in a non-pregnant person, it almost certainly comes from a small tumor in the pituitary gland.

These tumors are known as prolactinomas. The vast majority are benign and don’t change in size over time. A small proportion are large or tend to grow and require surgical intervention.

Also, there’s hyperprolactinemia when women do very strenuous physical activities or when they go through stages of stress. Some medications also have the adverse effect of increasing the hormone, including antidepressants. Additionally, hypothyroidism can cause increases in prolactin that don’t have any other cause.

Doctors caring for women with hyperprolactinemia also can’t rule out polycystic ovarian syndrome. They’ll ask for gynecological and other laboratory tests to confirm it.

In conclusion, prolactin is a fundamental hormone, especially for women, which can change. It’s important to talk to your doctor if you have gynecological or breastfeeding symptoms. Then, they can rule out hyperprolactinemia and treat it if necessary.

Situations Where You Should Avoid Breastfeeding
Do you know when you should avoid breastfeeding? Find out here which diseases mean you shouldn't breastfeed. Don't miss it! Read more »
Link copied!
Interesting Articles
Anatomy and physiology
A Fracture or a Sprain: What's The Difference?