A stomach ulcer is a lesion that appears in the mucosa lining the stomach and small intestine. The most common symptom is burning in the stomach. Discover some natural remedies that may help relieve it here! 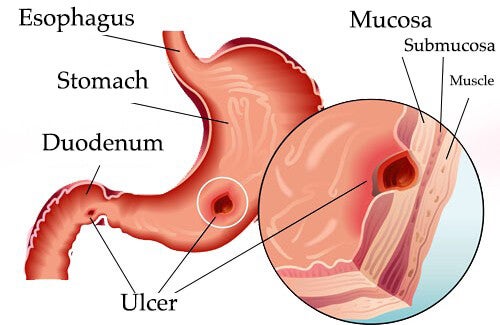 Gastric ulcers are lesions that appear in the mucosa lining of the stomach and small intestine. The most common symptom of this condition is burning in the stomach. In this article, we’ll explain some things that may help detect this illness as well as a possible natural treatment through dietary advice and natural remedies.

A stomach ulcer appears when the body has an excess amount of acid, especially in the digestive tract. This damages and irritates it and facilitates the proliferation of pathogens such as Helicobacter pylori. According to doctors, this bacteria is the most common cause of this condition.

Hyperacidity could be caused by a poor diet, usual consumption of medicines like aspirin or ibuprofen, bad habits, stress, or weak digestion.

Although a lot of people take antacids or baking soda to relieve the burning, you should know that these remedies only temporarily relieve the problem. They’ll never be able to cure the disease. If you take too many antacids, you could alter the stomach’s acids and this could lead to multiple diseases.

Diet is the basis for the treatment for gastric ulcers. Thus, you should avoid foods that make the body more acidic such as:

This article may interest you: 8 Symptoms that Bother You When You Have Stomach Ulcers

Avoid plants and spices that strengthen gastric juices because they could contribute to hyperacidity.

Rather, we recommend the following foods:

If you’re having a hyperacidity crisis, we recommend following a strict diet until it improves with potatoes, cabbage, carrots, and apples. You can cook them by boiling or baking them or also eat them raw or in smoothies.

Although these foods are especially recommended, some people don’t tolerate them well. If you feel that they give you heartburn, you should remove them from your diet.

In the past, people recommended drinking one-quarter of a large raw, peeled, and well-washed potato mixed with two spoonfuls of extra virgin olive oil for nine days. This anti-inflammatory and alkalizing preparation may prove to be effective and help relieve your symptoms. You can make raw potato juice yourself or even buy it.

You can also take daily mallow and plantain infusions which may help improve irritation and relieve inflammation in the entire digestive tract.

Read more here: 6 Foods You Should Eat if You Have Stomach Ulcers

Lastly, another natural antacid that you could take is orally consumed white clay, sold in herb and dietary stores. Mix one teaspoon of clay with water and mix with a wooden spoon. After ten minutes, mix again and then drink the mixture.

8 Great Foods for Fighting Gastric Ulcers
Even though everyone knows the foods that make them feel better or worse, these are the most recommended foods for anyone who suffers from gastric ulcers. Read more »
Link copied!
Interesting Articles
Naturopathy
What Is Colloidal Oatmeal and What Are Its Benefits?