In this article, we'll show you several natural remedies help you deal with the symptoms and some of the discomfort of dry coughing. 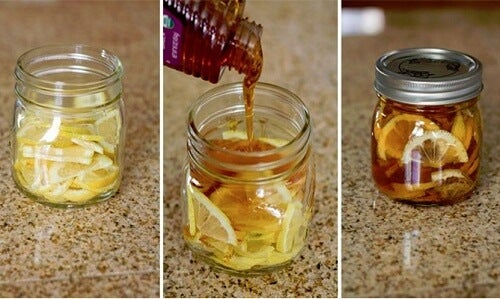 Dry coughing refers to coughing that isn’t accompanied by mucous or phlegm. A productive cough, on the other hand, is one that includes phlegm.  Dry coughing needs to be treated with a remedy that can loosen the phlegm so it can be eliminated.

For quick relief from dry coughing, there are several effective natural remedies. These principally ease respiratory tract problems.  Since coughing occurs more often at night, dry coughing makes it harder to stay asleep not only for the sufferer, but for anyone nearby.

Garlic is an excellent natural remedy for dry coughing, as its antibacterial properties help to relieve many ailments throughout the body, including those in the respiratory tract. Some say it’s very effective for unclogging the bronchial tubes.

How to make a home remedy with garlic

First, crush ten garlic cloves and place in a cup of olive oil to soak overnight.  The next day, strain the liquid and put in a closed container.  Take one tablespoon daily on an empty stomach until finished.  You’ll notice results after the first few tablespoons.

Vapor or mist is great for helping with phlegm and one of your best allies in problems with dry coughing. To make a vapor bath, boil a liter of water with eucalyptus and lemon leaves.  You can also use the juice of several lemons instead.  It’s ready when it starts boiling.  Lower the heat and cover your head with a towel and, taking care not to burn yourself,  Place your head over the container and rising steam.  The towel will make it easier to breathe in the vapors and unclog the bronchi to put an end to that cough.

7 Natural Ways to Boost Your Immune System and Prevent Colds and the Flu
A way to boost your immune system and fight cold and flu symptoms is to use medicinal plants. Read the article for a short list of the best options. Read more »
Link copied!
Interesting Articles
Naturopathy
What Is Colloidal Oatmeal and What Are Its Benefits?