Mild Cognitive Impairment, What Is It?

People with mild cognitive impairment may have difficulty remembering some names or specific words. 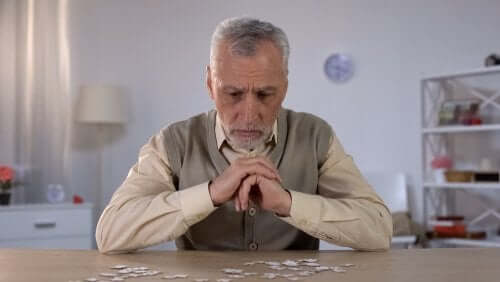 Mild cognitive impairment is a situation that tends to be confused with dementia. In fact, some experts consider it an early stage of dementia, while others classify it as a separate pathology.

It’s a disease in which the cognitive functions, such as memory, language and thought, are affected more significantly than in normal aging.

Mild cognitive impairment affects much of the population today. Specialists estimate that it increases with age and reaches almost 40% of the elderly over 85. In fact, women are more likely to suffer from it than men.

This pathology is still being studied, but advances in its definition and possible treatments are increasing every day. Therefore, in this article we’ll explain everything you need to know about mild cognitive impairment.

Over the years, the brain, just like our whole body, changes. It’s relatively normal for certain aspects, such as memory, to be subtly affected by aging.

However, people with mild cognitive impairment often notice that their cognitive functions are significantly reduced. As we’ve already mentioned, some of these functions are memory, thought, and language. For example, someone with this impairment may take longer to remember a person’s name or a particular word. However, these changes don’t usually interfere with that person’s daily activities.

This is the main difference with dementia: mild cognitive impairment allows you to continue to perform your normal routine. In contrast, people with dementia have greater difficulties, such as problems performing previously simple tasks.

Some experts state that this deterioration increases the risk of suffering dementia in the future, whether it’s Alzheimer’s type or another. But the truth is that, fortunately, some people with mild cognitive impairment never reach this point of dementia.

As we’ve said, people with mild cognitive impairment have problems that go slightly beyond those associated with normal aging. Some of them are:

Family members or people close to them will usually notice these changes. It’s important to try to calm that person down so as not to add to their confusion or feelings. It’s also essential to go to the doctor for consultation.

What are the symptomatic differences with dementia?

People with dementia have more severe symptoms that affect their daily lives. First, memory loss is often more pronounced, and even remembering family names can be complex. This is what doctors call amnesia.

In addition, it affects their sense of orientation, which makes these people tend to get lost even on familiar paths. Patients also easily lose personal objects or household items.

Those who suffer from dementia may feel a loss of interest in everything that used to interest them – also called abulia. It’s even normal for behavior to be altered and social skills to be diminished.

You may like: Anatomy of Dementia: How is The Life of a Demented Patient?

The diagnosis of this pathology is complex, since there are no specific tests to confirm it. However, there are certain criteria and tests that can guide the diagnosis, aside from the symptoms that we’ve already mentioned.

For example, doctors perform mental status analysis with tests such as the Mini-Mental Status Examination. This is a test that asks the person to answer several simple questions, such as saying the date or following a prompt. These tests last about 10 minutes and allow the doctor to compare the person’s mental functioning with others of a similar age.

If you think that you or someone around you is suffering from mild cognitive impairment, visit your doctor or a psychologist right away, as they’ll be able to carry out an appropriate evaluation and propose certain measures to help you deal with the situation.