Memory Loss and Forgetfulness: Are They Normal?

Memory loss and forgetfulness manifest in many ways. Sometimes, they're due to the normal aging process. However, other forms may be due to degenerative conditions. 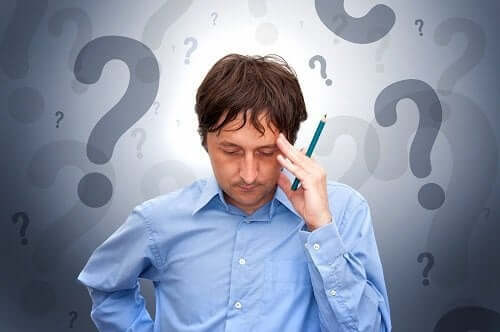 Symptoms of occasional memory loss and forgetfulness are normal, even if they do cause concern in the people who experience them, especially when they’re older. There’s no reason to worry in most cases because these symptoms are often either completely manageable and even reversible.

Many of us have wondered what is and isn’t normal when it comes to memory loss and forgetfulness. This isn’t easy to establish, as we often forget things and it isn’t necessarily due to a problem such as Alzheimer’s disease. Most of the time, it’s due to excessive stress or other temporary factors.

Of course, there are times when memory loss may indicate the beginning of cognitive deterioration that may or may not precede Alzheimer’s disease. To clear any doubts, it’s important to stay informed about this subject and consult your doctor.

In this article, we’ll take a look at this matter in a little more detail.

Starting at the age of 20, we all begin to lose brain cells. This loss increases as we age. Likewise, our body gradually reduces the formation of various chemical substances that are necessary for neurons to function properly.

All these change the way the brain stores memory information. And as we age, memory losses become more common and the ability to learn new things also reduces. This is not a sign of a serious health problem, though.

These memory changes often pertain to specific issues that are usually of little importance. You may, for example, forget where your glasses are or about your commitments for tomorrow. However, these types of memory loss characteristically occur in older people and don’t affect the ability to work, lead a social life and live independently.

There are times when memory loss is related to more serious health problems, but these are treatable and reversible. Some factors lead to frequent difficulty in remembering, but don’t involve a process of permanent memory loss. Some of these factors are:

In all these cases, the best thing is to go to the doctor so that they can determine the best treatment to follow. Likewise, it’s also common for memory losses to be due to an emotional state of stress, grief, anxiety and other emotional problems. In that case, a psychotherapist can significantly help.

Difficulty remembering may also be a sign of mild cognitive impairment, Alzheimer’s disease, or other forms of dementia. People with mild cognitive amnesia have more memory problems than usual. However, these aren’t too severe and seldom keep them from leading an independent life.

This type of deterioration is suspected when important events are frequently forgotten. Thus, it may be difficult to find the right words when expressing oneself, for instance. Only a doctor can diagnose this problem.

In the most severe cases, memory losses might be due to Alzheimer’s disease or vascular dementia. Symptoms of these types of dementia include:

Read on: Natural Remedies to Improve Your Memory

Other information to consider

Anyone who’s worried about the functioning of their memory should consult a doctor. Only they can determine the possible causes and, if necessary, diagnose the underlying health problem as early as possible. This is because early diagnosis considerably improves the prognosis.

Memory exercises and new learning are the best way to prevent memory losses. In addition, regular physical exercise is a great measure for preserving brain health.

There’s still no cure for Alzheimer’s disease at this moment, but there are many treatments to halt its progress. The good news is several ongoing investigations suggest the cure for this disease could be available within the next 10 years.

What to Eat to Improve Your Memory and Tips to Stimulate Your Brain
Your mental health is very closely related to what you eat. Eat foods that stimulate your brain and watch your lifestyle and things you do everyday to enhance your memory. Read more »