What Are Fast Food Hamburgers Really Made Of?

Read this article to uncover the mystery and find out what fast food restaurants really use to make hamburgers. 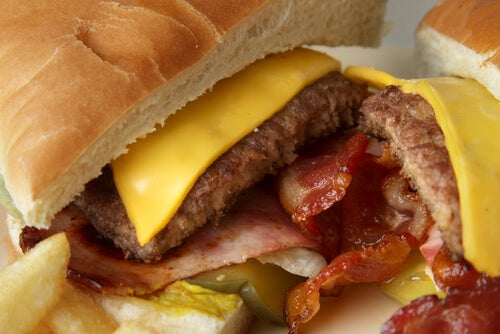 There are many myths about “fast food” ingredients. That is why scientists have conducted various investigations to find out what hamburgers in fast food chains really contains.

Junk food: and increasing presence in our diet

Junk food, also known as fast food, can have many negative consequences for your body. If you add the fact that we increasingly lead sedentary lifestyles, it’s not illogical to think that something is amiss in your diet and habits.

But beyond that, it’s not just that the food available in many places isn’t the healthiest, it is in fact the opposite of healthy. To make things worse, it’s easier to eat a hamburger than a salad in many countries.

If you only eat this kind of food once in a while for a treat, a celebration, or because you want to eat something different once a month, that’s not a problem. The problem is that a lot of people eat fast food more than twice a week.

The danger of eating too many hamburgers

Although hamburgers, as one of the best examples of fast food, can have high amounts of animal protein, they can also contain additives, conservatives, dyes, flavor boosters, sugar, saturated fat, sodium… and a lot of calories. Also, they don’t provide your body with fiber or vitamins.

The ingredients in fast food can be highly addictive. Yes, as strong as this word sounds, they can be addictive, and it shows in the way we eat them more and more.

That’s why children, once they go to fast-food outlets, can lose interest in vegetables or other food made by their parents. A similar thing can happen with adults, especially as we all live increasingly hectic lives.

Be warned though: if you frequently eat this kind of food, your cholesterol levels are likely to increase.

You may even develop bone problems (because of low calcium input) and cardiovascular diseases, obesity, constipation, cavities, general deterioration of your health, and heavy or slow digestion. Finally, you can experience changes in your preferences for other food, and biochemical changes in the brain (as if it were a drug).

Reasons to not eat hamburgers from fast food restaurants

If besides wanting to eat healthier, you’re an environment and ecology lover, then you have more potential reasons to stop eating fast food: chemical poisons (that cause cancer and chronic diseases) and damage to the planet.

Carbon hydroxide is an ingredient used to make hamburgers with the ability to kill bacteria. They treat the wastes from different meats and this creates its pink color. And some would say, it has no place in food.

In a meal or “combo”, there can be many more additives like carbon hydroxide that are bad for your health. So many in fact, that there would not be enough space in this article to list them all. This is why fast-food can harm your body, beyond the calories and fats they contain.

Jamie Oliver showed what they do with this “pink slime” when they use it in chicken nuggets, sausages and hamburgers.

Fast food chains raise animals in artificial conditions in which they cannot move. They do this so they can only eat and gain weight.

The killing methods tend to be slow and painful. Chickens are overfed, they lay eggs in small cages, and cows are confined to small spaces and fed corn or soy (they sometimes have to do an operation to remove their stomach) to make them gain weight faster.

In order to meet the huge demand for meat, producers destroy large areas of forests and rain forests so that they can grow soy, which they use to feed the livestock. Also, for the packaging of hamburgers and french fries, they must cut down thousands of eucalyptus trees each year.

Animals like cows release methane gas, which contributes to global warming. And, as if that weren’t enough, wrappers are often made with materials that are non-biodegradable, causing large amounts of trash.

Cows are injected with large amount of antibiotics and hormones to help them grow. They’re also often made of tendons, tongue, gums, snouts, eyelids, tails, intestines and blood.

What do hamburgers and other fast food products contain?

People that work in fast food restaurants have first-hand experience of what the most popular meals contain. A study by the social website called Reddit, got many ex-employees together to reveal the secrets of junk food.

What they found was shocking. For example, when hamburgers arrive at the restaurant (raw), they do not look like meat at all, much less like they look in ads. That is why they brown them as much as possible and then add different sauces.

Also, they say that although the cleaning rules can be very strict in the restaurant, employees use the same oil to fry everything due to lack of time and turnaround pressures.

According to an official message from the most popular hamburger chain in the world, they do not add any conservatives to their meat. However, various chemicals (e.g. trichloroethane, dieldrin, ethylbenzene, etc.) can be found in fast-food meat. This is the reason why hamburgers can last such a long time and they won’t spoil.

10 Foods that Make You Age Faster
Some foods actually rob you of energy and are quite toxic. Here are ten foods that make you age faster and prevent you from being as healthy as you can be. Read more »
Link copied!
Interesting Articles
Did you know?
New Year's Traditions Around the World