Increased sensitivity to odors may be considered a benefit, but those who have it actually suffer from it. Although it's a rare condition, it's part of the curious disorders related to our ability to smell. 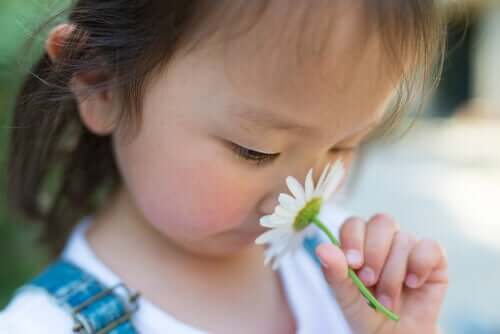 Oversensitivity to odors is rare as a disorder, but in some people, it’s expressed in a lesser form. After all, many of us know people who clearly perceive odors in a heightened way.

It’s not exactly one of the senses from which the greatest benefit can be derived. For this reason, those who are born with or go through a period of hyperosmia see their quality of life diminished.

The name hyperosmia derives from Greek. It’s a word composed of two smaller parts: hyper – which means something increased – and osmia – which is the sense of smell. Thus, hyperosmia is an oversensitivity to odors.

Don’t confuse this with increased sensitivity in more common situations, for example, in pregnancy. In diagnosed hyperosmia, there’s a lowering of the olfactory threshold. As the threshold lowers, the concentration of substances required in the air to detect an odor also reduces.

Hyperosmia is very rare. There aren’t any reliable statistics to know for sure how many people are affected worldwide. Data are known on the opposite disorder, anosmia – loss of smell – which affects about 0.3 % of the population.

As we’ve already mentioned, hyperosmia is one more abnormal situation within the spectrum of odor sensitivity disorders which entails oversensitivity to odors. However, at the other extreme is anosmia, as mentioned above.

The whole set of these disorders is dysosmia and consists of:

Keep reading: How to Get the Bad Smell out of Towels

The example par excellence is pregnancy. Especially in the first trimester of pregnancy, women experience an increase in their perception of odors, often to the point that the sense of smell itself can produce nausea typical of this period.

In conclusion, the normal and natural evolution of this hyperosmia of pregnancy is that it tends to disappear as the weeks go by. It’s the same hormonal movements that determine its appearance and subsequent disappearance. In a few pregnant women, the symptom accompanies them for nine months.

However, these are exceptional cases that can be associated with hyperemesis gravidarum, which manifests itself with repeated vomiting and risk of dehydration.

Other physiological causes of oversensitivity to odors

Two other physiological situations of increased odor sensitivity are menopause and pre-feeding times. In menopause, hormonal changes are once again the culprit. Before meals, on the other hand, oversensitivity to odors is an instinctive fact that stimulates appetite.

Learn more about: Symptoms and Treatment of Migraines in Children

In conclusion, if you sense that you have an oversensitivity to odors, it’s most likely a physiological trait or a particular temporary increase in your sense of smell. You shouldn’t be concerned in the first instance.

However, if you consider that your sense of smell is excessively powerful and you notice that it affects your quality of life, then ask a medical expert. A few questions from the professional and a few studies will be able to guide you in the diagnosis.