Risks of a High Sugar Diet During Pregnancy

Nutrition education and counseling is a common strategy to improve pregnant women's diets. We'll explain the risks of a high sugar diet in this article. 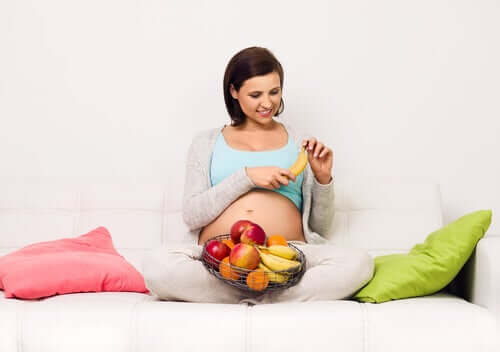 A high sugar diet can have health complications for anyone, but especially during pregnancy. Complications can be much greater, and the risk of developing diseases in the future increases.

Pregnancy is a stage that comes with many changes. The body prepares to create a new life, and this includes transformations in the whole body.

What happens during pregnancy?

Pregnancy is a vitally important stage. Here, various processes of growth, metabolic adaptation, and preparation for life outside the womb take place.

It’s a situation where the mother has changes in the concentration of glucose and plasma lipids, as well as changes in hormones, like insulin. Likewise, there’s also a certain resistance to this hormone.

In fact, this happens to ensure that glucose gets to the mother’s brain and the fetus. Also, it directs glucose to the mammary gland and reduces its use by the other organs.

In some women, the carbohydrate metabolism changes throughout pregnancy. This change causes high fasting blood sugar levels, above normal values.

When fasting blood sugar and insulin levels are normal, or even low, after carbohydrate consumption, blood glucose rises above normal values. These changes are more pronounced in the third trimester of pregnancy.

During pregnancy, as we mentioned, the body becomes more resistant to insulin. In this way, sometimes the body needs more of this hormone to metabolize the sugar in food. When you have insufficient or no insulin, glucose builds up in your blood.

If your body doesn’t regulate glucose properly during pregnancy, changes can occur that seriously affect the fetus’s development, in many cases. Also, they can predispose you to diabetes in adulthood.

In addition to what we mentioned above, a mother may follow a high sugar diet during pregnancy, which can change this situation even more. Then, gestational diabetes can happen. This is where diabetes is diagnosed for the first time during pregnancy.

Pregnant women with this disorder have a higher risk of suffering from some disorders such as the following:

Also, several studies show that 50% of patients with gestational diabetes have an increased risk of developing type 2 diabetes in the next 10 years.

What should you eat during pregnancy?

The first thing to keep in mind is that diet is key to preventing gestational diabetes. According to the World Health Organization, a healthy diet during pregnancy has enough energy, protein, vitamins, and minerals.

To do this, you need to make sure that you get enough of these foods:

Also, don’t forget that, in the case of diabetes, the treatment consists of daily control of blood sugar, a healthy diet, and physical exercise. If blood sugar levels are too high, the doctor will prescribe the necessary medications.

A high sugar diet during pregnancy is not recommended

Nutrition education and counseling is a widely used strategy to improve the nutritional status of women during pregnancy. Additionally, it helps prevent future complications.

The strategy mainly focuses on the following elements:

It’s important to take the advice of doctors and nutritionists on following a healthy diet that’s low in sugar. Likewise, daily physical activity is essential during pregnancy.

The Importance of Diet in Pregnancy
Eating a healthy diet in pregnancy meets the nutritional needs of both mother and fetus. In this article, discover more about this topic! Read more »
Link copied!
Interesting Articles
Pregnancy
Do Home Pregnancy Tests Work?