Hypermenorrhea: What Is It?

Hypermenorrhea is a disorder that often goes unnoticed by women. We'll you about its symptoms and what you can do to treat it. 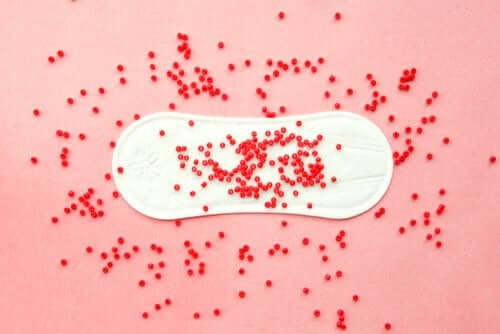 Hypermenorrhea is a change in menstruation where the bleeding is very heavy and also lasts longer than usual. The medical term usually used for this issue is menorrhagia.

Most women don’t usually worry about having very heavy menstrual bleeding from time to time. However, hypermenorrhea is different, because it involves a series of symptoms and complications.

It’s usually due to hormonal disorders, endometrial polyps, fibroids, or blood disorders. This is an important health issue, and so, in this article, we’ll tell you everything you need to know about hypermenorrhea and how to detect it.

Hypermenorrhea is a disorder where menstruation occurs with much heavier bleeding than normal. In addition, it tends to last longer than normal periods (more than 5 days).

Hypermenorrhea occurs during the normal days of menstruation; that is, the menstrual cycle follows the same schedule, and isn’t altered. This makes it even more difficult to distinguish and identify this pathology.

The main symptom of this disorder is, as we’ve mentioned, that the bleeding is very intense. The woman who suffers from it needs to constantly change the pads or tampons she’s using.

In fact, it’s often difficult to control the menstrual flow, even when wearing a tampon and a pad at the same time. This can affect sleep, since women often have to get up during the night to change.

According to the Mayo Clinic, it’s important to keep in mind that hypermenorrhea is often accompanied by other symptoms due to large blood loss. Women often suffer from exhaustion, fatigue, and even difficulty breathing.

You may be interested in: Breast Pain and the Menstrual Cycle

In addition to anemia, hypermenorrhea can cause very painful menstrual cramps. These cramps are so intense that they often cause women to visit their gynecologist.

However, ideally, if you notice changes in your bleeding, or think it’s more intense than normal, you should see your doctor. There’s no need to be ashamed; paying attention to menstruation can help detect many illnesses in time.

What are the causes of hypermenorrhea?

In many cases, it’s difficult to find out the exact cause of this pathology. However, some of the most frequent causes are:

On the other hand, blood disorders, such as bleeding or clotting disorders, can also cause hypermenorrhea. Similarly, certain medications, such as anticoagulants, may be part of the problem.

You may be interested in: Why You Feel Pain During Menstruation

As we’ve already mentioned, the first thing is to go to the doctor if you have any questions about your bleeding. You’ll have to tell your doctor how many days your period usually lasts and the amount of flow you usually experience.

The gynecologist will probably examine you physically and send you certain complementary tests. Firstly, a blood test is usually done to evaluate if there’s anemia or other blood disorders.

You also usually undergo a test called a pap smear. It consists of collecting cells from the cervix to check for infections or changes that are related to cancer. The ultrasound usually helps the diagnosis.

The treatment of hypermenorrhea will depend on the cause and severity of the situation. It can be based on medications, such as nonsteroidal anti-inflammatory drugs (NSAIDs) that help control the associated pain.

However, it also has contraindications, so you must consult your gynecologist as to which is the best option for you.

Likewise, there’s a hormonal intrauterine device that releases a substance that reduces the thickness of the endometrium. This will reduce the menstrual flow and cramps.

There are other surgical treatments that can also help. They’re slightly more complicated, so it’s up to the physician to explain all the options to you.

If you think you’re suffering from hypermenorrhea, don’t hesitate to go to the doctor. Paying attention to your menstruation is one of the basic ways to help you reach a diagnosis and find the right treatment.

What Should You Avoid During Your Period?
Due to this, many people feel like they're not able to carry out their daily tasks normally. Do you know what you should avoid during your period? Read more »
Link copied!
Interesting Articles
Illnesses
What Causes Yellow Skin on the Bottom of the Feet