How to Treat Cystitis During Pregnancy with Home Remedies

If you think you may have cystitis during your pregnancy, you should consult your doctor. There are some natural remedies that can help prevent it or contribute to the treatment, but they can't replace the antibiotic. 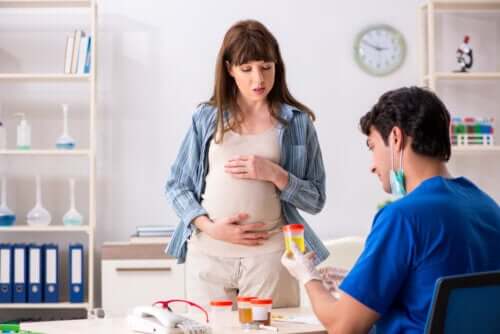 Cystitis during pregnancy is very common since the anatomical characteristics of a pregnant woman favor this urinary infection. Specialists estimated that between 5 and 10% of pregnant women get it.

This is because the increase in the size of the uterus leads to a compressed bladder. This favors the retention of liquids and, with it, the development of pathogens. Also, if the presence of glucose in urine increases concomitantly, bacteria grow with more substrate.

What are the signs and symptoms of cystitis?

Cystitis in pregnancy causes the same symptoms as the disease in women who aren’t pregnant. The most characteristic manifestation is a burning sensation when urinating – one that those affected describe as burning, pain, irritation or discomfort.

It’s also very common to have a symptom known as pollakiuria, which consists of urinating very frequently, but in small amounts. Only in some cases does polyuria occur, which is an increase in the volume of urine.

Likewise, it’s common for cystitis in pregnancy to cause nocturia or an undelayable need to urinate after going to sleep. Many women with this problem also indicate that they feel like continuing to urinate, immediately after having done so, but without being able to.

Keep reading: What Do Your Kidneys Do?

Home remedies for cystitis during pregnancy

Cystitis during pregnancy should be treated as soon as it is detected, as all urinary tract infections can be dangerous to the fetus. In addition to seeing a doctor and following their directions, there are several home remedies that can be helpful.

A study published in JAMA Internal Medicine and conducted in the United States indicates that increased daily fluid intake can reduce the risk of recurrent cystitis by up to 50%. Doctors recommend you drink between two and three liters of water a day to accelerate the release of toxins.

Hydration is always a relevant aspect, but especially during the months of pregnancy. If the woman lives in warm climates or goes through a large part of the gestation in summer, it’s essential that she drinks enough water!

Keeping the kidneys active and emptying the bladder on a regular basis helps prevent cystitis in pregnancy. This is because if residual urine accumulates from not emptying completely, the risk of infection from bacterial contamination increases.

Under no circumstances should urine be retained. An extreme form of this condition is acute pregnancy retention, a situation in which the outflow of fluid to the outside is blocked.

Numerous studies have proven that probiotics containing lactobacilli are effective in repopulating vaginal flora. This stabilizes the microbiota and prevents the development of pathogens such as Escherichia coli, Proteus mirabilis, Staphylococcus saprophiticus and Klebsiella pneumoniae.

This prevents the appearance of cystitis during pregnancy. It’s best to take them with the initial treatment with antibiotics and then continue to ingest them regularly to avoid relapses.

Several studies have pointed out that cranberries have astringent and antiseptic properties. They’re an appropriate choice to prevent cystitis in pregnancy, since they prevent bacteria from clinging to the walls of the urinary tract.

The most advisable method is to liquefy half a cup of cranberries in one cup of water and drink this juice in the morning, for 10 days. Today it’s possible to find even commercial formulations on the market.

You may also be interested in: The Benefits of Cranberry Juice

There aren’t enough studies on the effectiveness of vitamin C in preventing or treating urinary tract infections. However, some researchers point out that this substance contributes to acidifying the urine and this, in turn, would help people who have this problem.

Consumption in a healthy adult should be between 75 and 90 milligrams per day. In those who have cystitis the indication is greater, but it’s for the doctor to determine.

How to prevent cystitis during pregnancy

The best way to prevent cystitis in pregnancy is by keeping the kidneys active, eating a proper diet and applying correct hygiene measures. It’s always best to try to avoid cystitis from appearing than to have to resort to antibiotics.

It’s important to clean the genital area properly after urinating. It should be done from front to back to prevent any remaining fecal matter from entering the vagina.

Also, it’s advisable to use cotton underwear that isn’t too tight. It’s also best to urinate before and after having sex.

Drinking enough water during the day and emptying your bladder completely every time you feel the urge to urinate are simple prevention measures. The goal is to keep the kidneys active and avoid residual urine.

On the other hand, avoiding sugar-rich and alcoholic beverages will reduce the factors that favor bacterial colonization. Likewise, we recommend you avoid regularly eating spicy, fatty, or fried foods. Instead, increase the presence of water-rich vegetables and red fruits, such as cranberries.

Monitoring the evolution of cystitis in pregnancy

If the pain or burning when urinating begins to dissipate after an infection, it’s an improvement. If, on the other hand, the discomfort increases, the frequency of urination increases and the urine looks strange, it means that the condition has worsened. The physician should be notified of this as soon as possible.

Natural Remedies to Fight Vaginal Boils
Vaginal boils can become infected if left untreated. In this article, we tell you why they occur and how to treat them with natural remedies. Read more »
Link copied!
Interesting Articles
Pregnancy
How Heat Affects Summer Pregnancies

Summer pregnancies can cause certain fears and uncertainties for many women. They ask themselves what consequences the hot summer temperatures…

How can you manage stress during pregnancy? Without a doubt, pregnancy is one of the most wonderful stages a woman…

Pregnancy
What Does An Ectopic Pregnancy Involve?

Ectopic pregnancy is a pathology that requires early diagnosis and treatment to avoid putting a woman's life at risk. If…

Pregnancy
Birth Defects: What They Are and How to Prevent Them

Birth defects are genetic or physical anomalies that occur while the fetus is developing in the mother's uterus. In order…

Asthma during pregnancy is a risky disease for both the fetus and the mother. Specialists estimate that between 3 and 6% of the world's population has asthma, making it a…

Pregnancy
Pregnancy in Summer: How to Cope with High Temperatures

Summer is approaching for many countries, and we need to get ready for heatwaves. Most of us are having the…