How to Make Poke, A Very Popular Food

Poke is a Hawaiian food that’s made with raw fish, rice, and vegetables. In this article, we show you how to make poke at home. 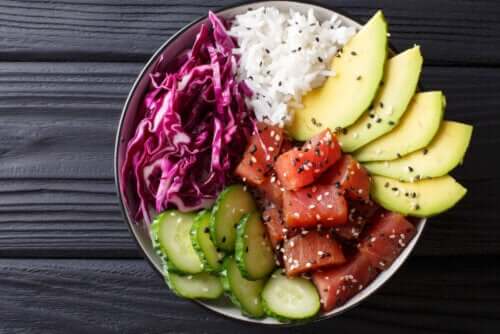 Perhaps you’ve heard of poke lately, as it’s a food that’s become very popular around the world. In this article, we’ll tell you more about it and show you a recipe.

Although it’s of Hawaiian origin and raw fish is its main ingredient, today, it’s one of the most popular dishes in European and American countries. Also, you can use other ingredients to make different versions of it.

For starters, you should know that the word poke in Hawaiian means “to slice” or “cut crosswise into pieces.” This name is because this recipe is made with pieces of raw fish. To prepare the raw fish, you have to season it with soy sauce, sesame, and other condiments. Then, you have to mix it with vegetables.

Some of the fresh vegetables that are added to this dish are cucumber, seaweed, avocado, and onion. You have to serve this preparation in a bowl. If you prefer, you can also serve it with white rice.

Read on to learn more: How to Prepare Delicious Shrimp Tacos: 3 Recipes

What’s the history of this food?

Regarding the history of this dish, it first served to recharge the energy of the island’s fishermen. The locals prepared it with the fish that inhabit that area.

To do this, the locals gutted the fish, removed the skin, and cut it into pieces with their hands. Then, they preserved it with salt and added limu seaweed and typical seasonings, such as inamona (made from roasted nuts of the Kuku). After marinating it for some time, they mixed it with vegetables.

As we mentioned above, over the years, the dish varied due to influences from other countries. Of these variations, Japanese and Indian cuisine contributions stand out. This is because, in the 1970s, migration flows allowed inhabitants of those countries to arrive in the area.

Due to that, salmon, soy sauce, and rice were added to the dish. In fact, today, gourmet poke recipes include almond milk, quinoa, kale, tofu, chia seeds, and poppy seeds, among other ingredients.

Poke: a dish packed with nutrients

In addition to its refreshing flavor, this dish stands out due to its nutritional contribution from the combination of different ingredients. In this regard, scientific evidence shows that fish and shellfish are a source of protein and healthy omega-3 fatty acids.

For their part, seeds and nuts provide omega-3, -6, and -9, while vegetables provide fiber, iron, and calcium. For example, if you add chia seeds, the poke will contain a significant amount of fatty acids.

Even in vegetarian preparations that include tofu instead of meat, other ingredients provide protein. For all these reasons, we recommend you to try this food that’s packed with healthy nutrients.

You should also read: The Differences Between Vegan, Vegetarian and Flexitarian

How to make poke

Although there are many different ways to make poke, one of the simplest is the recipe you can find in the book The Poke Cookbook: The Freshest Way to Eat Fish.

We’ll share it below! Write down the ingredients that you’ll need and follow the steps to make this yummy and nutritious recipe.

To marinate the fish, you’ll need the following:

These are the ingredients you’ll need for the poke itself:

To season and enhance flavors, use three green onion juliennes and hot sauce.

How to marinate the fish

As this recipe is raw, we recommend making sure that all the ingredients are clean and in good condition.

What you need to do before assembling the poke

How to assemble the poke bowl

As you probably realized in this article, in addition to this being a very popular dish, it’s also a mix of beneficial nutrients and it’s very easy to make. Keep in mind that this is only a suggested poke recipe, meaning you can vary it however you like!

How to Make Delicious Bibimbap
Bibimbap is a delicious Korean rice dish. Discover how to make this nutritious and simple recipe! Read more »
Link copied!
Interesting Articles
Nutrition
Breaking the Myths Regarding Gluten