How to Know if You're Anemic

How can you know if you're anemic? First, you'll have to see a doctor. They'll help you analyze your symptoms, and then you'll need to undergo certain tests to confirm or rule out the possibility. 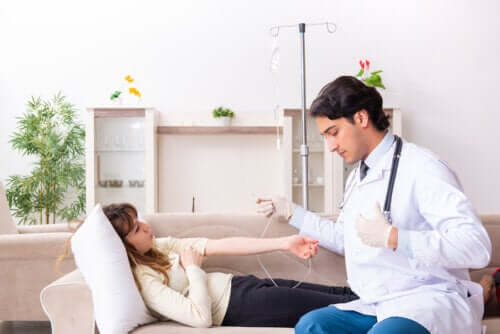 It’s very important to know if you’re anemic, especially, for example, during pregnancy. It’s also essential for people who suffer from symptoms like tiredness and fatigue without any apparent reason.

Identifying anemia starts with noticing the signs and then continues with complementary methods. To determine this condition, the problem lies not in the medical aspect itself, but in how each person’s body reacts to a lack of hemoglobin.

Therefore, the clinical manifestations of anemia vary from one patient to another. Many times, they’re unspecific, including symptoms that may be caused by other pathologies as well. No matter what, a health professional will need to gather the loose ends to request pertinent laboratory testing.

In this article, we’ll take a closer look at anemia.

Anemia is a deficit of red blood cells and hemoglobin in the blood. Both components have normal values that we should maintain over time for the body to function properly.

Red blood cells are the blood cells that transport the hemoglobin protein within them. These cells have a half-life of about 3 months, meaning that our body replaces them every 90 days.

As you can see, the process involves both red blood cells and hemoglobin. At the same time, it also involves indirectly involves iron. Therefore, the three vias that can lead to anemia are the following:

How to know if you’re anemic: Symptoms

The signs and symptoms of anemia are varied and unspecific, meaning it’s hard to know if you’re anemic. However, being aware of the symptoms can help you know if you should see a doctor.

Tiredness, fatigue, and a lack of strength are all common characteristics. Since less oxygen circulates through the body, cells reduce their metabolic activity and wear out sooner. Therefore, it’s harder to exercise, run, and even walk. Daily activities like walking up a staircase can become a challenge.

In cases of anemic, the respiratory tract attempt to make up for the lack of oxygen by taking it in from outside. Therefore, you may feel out of breath and increase your rate of breathing.

It’s unlikely that you’ll be able to know if you’re anemic by observing the color of your skin. However, as we said, this factor can serve as a guide. The lack of red blood cells leads to overall paleness due to a loss of ruddiness.

Other symptoms that can indicate that you’re anemic are the following:

Discover more: Iron-Deficiency Anemia Diet: The Foods to Include

How to know if you’re anemic: Blood work

If your doctor suspects anemia, he or she will order a series of biochemical parameters, among which the most important will be hemoglobin. Through laboratory testing, you can find out the concentration of protein in your blood.

If a woman’s hemoglobin levels are less than 12 deciliters, or a man’s levels are less than 13, then they are anemic. Then, the doctor will need to determine the origin of this anemia and the form of the red blood cells to characterize the illness. To do so, doctors will perform a blood smear.

So, how can you know if you’re anemic?

The only way to truly know whether or not you’re anemic is by measuring the hemoglobin in your blood via laboratory testing. Several symptoms can point to anemia, but the diagnosis is based on more than symptomology.

If you suspect that you’re anemic because you’re tired or pale, experience headaches or coldness in your extremities, see your doctor. Once you explain your symptoms, your doctor will request pertinent testing.

The treatment of anemia in all of its forms is possible, either with iron supplements or by eliminating the causes of bleeding. So, if you suspect anemia, don’t put off seeking medical treatment.