Anemia and Iron Deficiency: Are They the Same?

Iron deficiency causes a specific type of anemia: iron deficiency anemia. However, there are other types derived from different causes. Although confusion is common, a mistaken diagnosis could lead to incorrect treatment. 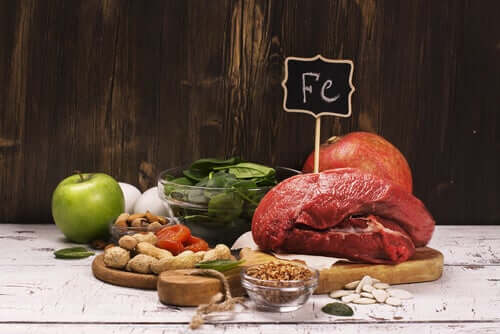 Although people tend to confuse the terms “anemia” and “iron deficiency”, the fact is that they aren’t the same. Yes, it’s true that there’s an association between a particular type of anemia and iron deficiency anemia, but they can’t be used as synonyms.

In reality, anemia is a heterogeneous disease that may have different causes. Although iron deficiency is one of them, there are other types that are caused by malfunctions in the production of red blood cells or hemoglobin.

It’s important to know that iron is part of the hemoglobin in red blood cells. It helps make it possible to transport oxygen to all the cells in your body, which need it to perform their vital functions.

Both situations are related in some cases, but not all types of anemia have iron deficiency. In this article, we explain why anemia and iron deficiency aren’t the same and how to tell them apart.

How to distinguish between anemia and iron deficiency

In order to distinguish between anemia and iron deficiency, it’s important to know what they are and why they occur. We already mentioned that iron is an essential component in red blood cells to transport oxygen.

You get iron from your diet and, obviously, some foods contain more iron than others. That means that, firstly, certain eating habits, such as being vegetarian, can cause iron deficiency.

This is because red meat and fish are iron-rich foods. Another reason is that you may have a problem with the absorption of iron. Certain pathologies that affect the digestive tract, such as celiac disease, alter the process of nutrient incorporation.

Hereon, we need to talk about anemia. Anemia is defined as a decrease in the number of red blood cells, decreased hemoglobin concentration, or low hematocrit value.

Therefore, it’s important to mention that anemia can have many causes. Iron deficiency is one of them, which affects hemoglobin concentration. However, you can’t use them interchangeably.

This is a disease characterized by low iron levels, which affects the bone marrow’s correct hemoglobin production. In turn, this lack can have many causes, such as:

On the other hand, it’s important to know that there are many other types of anemia. Aplastic anemia, for example, is when the body is incapable of producing enough red blood cells. It may be caused by a bone marrow alteration, an infection, or certain drugs.

You may enjoy this article: Seven Warning Signs of Anemia in Children

The lack of certain vitamins, such as vitamin B12, can alter the production of red blood cells. This is a common condition in people with chronic alcoholism. Another common cause is suffering from a chronic inflammatory disease, such as rheumatoid arthritis.

In addition, anemia can also be a result of a carcinogenic process that affects the blood, such as leukemia. It may even be hemolytic anemia, in which the problem lies in the fact that the body destroys red blood cells faster than it creates them.

This article may interest you: Ten Foods You Should Eat to Fight Anemia

In conclusion, anemia and iron deficiency aren’t the same

The idea is to understand that, although these conditions tend to be used synonymously, they aren’t the same conditions. Only one type of anemia, iron deficiency anemia, the most common, is associated with iron deficiency.

Likewise, many other types of anemia are the result of other processes. The important thing is to arrive at a diagnosis to start appropriate treatment. Not all anemic conditions improve by taking iron as a supplement. Therefore, a medical professional must determine what steps each patient has to take.

Infusions for Anemia
Do you have anemia and don't know how to deal with it? Some infusions for anemia and a number of recommendations may allow you to stabilize iron levels. Read more »
Link copied!
Interesting Articles
Illnesses
Benign Tumors: Everything You Need to Know