When you experience a lot of anxiety, depression or negative thoughts, odds are that the disorder will also affect your body, triggering a variety of physical symptoms. 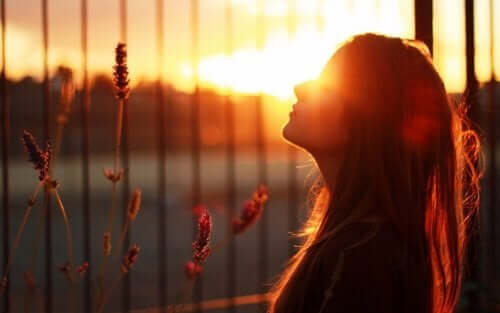 Pessimistic attitudes are related to a worse mental and physical health. Due to this, one of the questions to ask is how negative thoughts become diseases.

In recent years we’ve seen increasingly more literature on the relationship between mind and body, understanding that they’re much more closely related than we ever imagined.

Below, discover the mechanisms that explain this interaction.

The question: how do thoughts become diseases?

Many recent studies tell us that greater emotional well-being is associated with better physical health. Thus, reviews such as the one Professor Andrew Steptoe and his team conducted provide evidence about this.

Furthermore, as the authors themselves point out, this is the case both in terms of objective data and in terms of the subjective perception we have of them.

It seems that the order and hope that inhabit our ideas have the capacity to relate to physical health, through the functioning of the nervous system.

Thus, it’s observed that we’re more vulnerable to disease when negative thoughts invade us. Moreover, anxiety or depression, cause many organic manifestations, which clue us into this mind-body interaction.

When you feel anxious, you probably notice that your heart begins to beat stronger and faster than usual. Your hands also shake and you begin to sweat.

All these symptoms appear because, depending on the way in which the brain works, certain physiological responses take place. These responses are expressed, for example, through pulse, breathing, or pupil dilation.

In other words, stress alters body function in a similar way to what happens when you exercise. However, there’s a big difference between them, since the reason for them isn’t physical activity, which prevents channeling all that energy with a reasonable purpose.

Perhaps it’s best if we illustrate it with a metaphor. Imagine that a multitude of cars are driving down a highway. Suddenly, the road ends and the traffic has to be absorbed by a secondary road. This is most likely going to result in a car accident. The same thing happens with the body.

You have a heart sending cars and cars to the rest of your body, without the capacity to receive them. If this situation persists for a short time or isn’t very intense, nothing happens. But if the reaction is persistent or continuous, the damages become significant.

So far, we’ve talked about how the mind can act in a direct way on physical responses. However, thoughts also accompany your different behaviors. Here’s a small example.

Some vital stages aren’t characterized by being especially joyful or stimulating. In these times, people frequently neglect their self care, with diet being one of the first habits they alter.

Thus, they cut out those foods that they don’t like and are usually healthier for others that are much more pleasurable.

Why do we do it? It’s a question of balance. Through taste, we try to get the satisfaction that we seem to have lost in other areas. Unfortunately, the popular image of a girl sitting on the couch binging on ice cream after a breakup is real.

Also, lack of motivation is equally common in sad states. Thus, the things you used to do a lot before are much harder for you. You try to simplify your daily routine. For example, instead of going to the supermarket after work, you order a pizza, which requires less effort.

However, these behavior patterns, which sometimes follow the emotional discomfort that you feel, also become detrimental to health.

As a recent publication by scientist Rai Ajit K. Srivastava (Wayne State University, United States) points out, diabetes, cardiovascular diseases, or obesity are some of these consequences.

This article may interest you: The Quartet of Happiness

The other side of the coin

According to what we mentioned above, some aspects deserve special attention if you want to understand the course of different physical conditions.

In short, we commented on the role played by both the body’s reaction to discomfort and the harmful behaviors it tries to manage it with. Both factors can lead to the development of different alterations and pathologies.

However, despite the fact that negative thoughts become diseases for different reasons, it’s also true that positive attitudes are related to greater well-being and lower stress levels.

If you want an optimal state of mind and improve your health, remember to always resort to optimism, social support, and an active lifestyle.

Lose Weight and Not Your Mind with this Flexible Diet
Tired of strict diets that do nothing but stress you out? Read on and find out more about this simple, delicious and flexible diet. Read more »
Link copied!
Interesting Articles
Healthy mind
Jacobson's Progressive Muscle Relaxation