Cleaning Products: Are You Using Them Too Much?

Did you know that keeping your home TOO clean could risk your health and damage the environment? Besides being bad for the environment, overusing chemical cleaners can also be harmful to your health, as they often get inhaled. 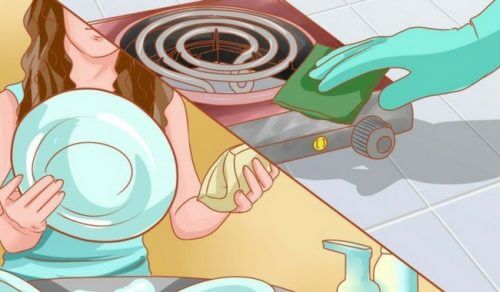 Most homemakers and housekeepers love a clean, tidy house. However, sometimes, home hygiene becomes an obsession, thus bringing health problems along with it. Besides, you must be very careful with the cleaning products you use because many of them are harmful and toxic.

Learn about the risks of keeping too clean a home.

Excesses of all kinds are bad, as you probably already know. This is true even if you think you’re doing something for the good of the people around you.

When it comes to cleanliness in the home, many people take it to an unhealthy, obsessive extreme.

When someone persistently and anxiously insists on tidying up, gets mood swings on seeing something out of place or cleans the same area over and over, that person may have a disorder. All he/she can think of is cleaning and organizing.

A person behaving this way may suffer from obsessive-compulsive disorder (OCD). This is characterized by an irrational obsession and compulsion for doing a certain activity or job.

When it comes to the urgent need to clean, it may stem from an excessive worry of getting sick or infected. Thus, cleaning certain areas or surfaces (like the kitchen counter or table) and washing his/her hands become the way that person deals with anxiety.

When someone has an obsession like this is because that person’s thinking has been altered. He/she keeps repeating things, often without even realizing that he/she has a problem.

You should also read: My Partner Doesn’t Help Around the House

You must be aware of certain symptoms that can indicate there’s a cleaning-related obsessive disorder involved.

Some indications that shouldn’t be ignored are:

However, just because you spend a whole Saturday deeply cleaning your house doesn’t mean you have a problem.

Home hygiene becomes an obsession when, because you’re cleaning, you start missing out on things like spending time with your family or going out at night.

Even if you don’t see yourself in the above cleaning obsession, we should still discuss the other common problem in today’s homes. We’re talking about the use of certain cleaning products that affect you and your family’s health.

When you hear the word “pollution,” you probably think of litter or smog.

But, even at home, you may be harming the environment by your everyday cleaning habits.

It’s true. A typical house contains between 3 and 5 liters of toxic material in the form of chemical cleaners and plant fertilizers.

The most-used cleaners (detergents, bleach, etc.) have many harmful effects, such as:

Chemical cleaners pollute the air inside your home (which may be up to 5 times worse than the air outside, in the streets).

In addition, it’s not uncommon to get rashes, nausea and burns from these products, which are supposed to help you keep your house clean and disinfected.

When they come in contact with your skin or lungs, those cleaning products may cause problems such as allergies or poisoning.

Besides, don’t forget about harmful laundry detergent, which affects your skin and gets breathed into your body while you’re wearing clothes washed with it.

In addition, dish detergent contains a substance called dioxane, a major contaminant of underground water. It’s highly toxic and isn’t as biodegradable as other compounds.

See also: 5 Cleaning Tricks if You Don’t Like to Clean

Bleach and Its Health Effects

Bleach is considered one of the most powerful cleaners, but it’s not at all harmless.

Discovered in 1774, it’s used to whiten certain materials and has been employed in diluted form as a cleaner in the home for many years.

The antibacterial power of bleach is very potent.

However, instead of considering it your protector from microorganisms that can make you sick, remember that using bleach long-term also affects your immune system. Your body eventually isn’t able to know the difference between good and bad bacteria.

In addition, bleach not only causes skin burns, eye and nose irritation, as well as respiratory issues, but also decreases oxygen levels in your blood. It’s especially harmful for children under 12 years of age. They can have an increased risk of sinusitis, pneumonia, and bronchitis.

As if all of that weren’t enough, bleach is harmful to the environment and contaminates the ground, water and air.

So, what are you waiting for? Relax on the cleaning, and turn to natural products instead. It’s worth the change!

How to Degrease the Stove with 5 Ecological Solutions
Although we use it multiple times throughout the day, sometimes we prefer to wait a while to try to degrease the stove. Try these 5 ecological solutions. Read more »
Link copied!
Interesting Articles
Did you know?
New Year's Traditions Around the World