My Partner Doesn't Help Around the House

If your partner doesn't help around the house, it may be because of the way they was raised. Luckily, this behavior can be changed. 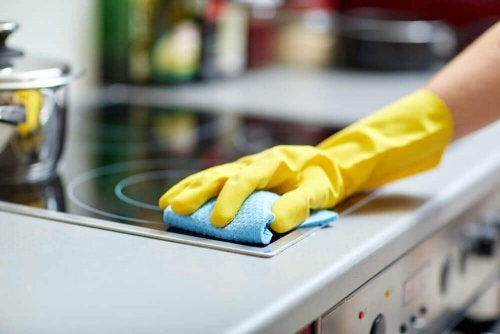 Lack of cooperation is a constant source of problems among couples. “My partner doesn’t help around the house” is a phrase that we often hear in daily conversations. Fatigue and frustration are the main characteristics of this situation.

Back in the day, this situation used to be justified by the belief that the man was responsible for the family’s income, while the women stayed at home to take care of it. However, times have changed. Women have assumed other important roles. However, that same mentality sadly often persists: she’s the one who should be in charge of the home.

Although there is a lot of talk these days about gender equality, the truth is that there are still bridges to cross. And, unfortunately, there are still men who believe that they should not lift a finger when it comes to household chores (for example) and that it’s she, their partner, who should take care of them.

Why Won’t My Partner Help Around the House?

The perception of gender is distorted by history. There has always been inequality between men and women, especially when it comes to their different expectations within the marriage. Therefore, there are many reasons why you might say, “My partner doesn’t help me around the house.”

Read this article: 6 Arguments Every Couple Has

What Should You Do?

If you’re mentally or physically tired of your partner’s lack of collaboration, it’s time to take action. We’ll give you some tips to help fix the situation, once and for all.

Teach Your Partner How to Help

Like we said, this issue is not always due to your partner’s lack of interest. Your partner’s upbringing and your own actions can make him or her dependent, and they may have absolutely no idea how to help out. Then, you can teach your partner.

Give your partner some basic tasks, like cleaning the windows, washing the dishes, getting rid of cobwebs from ceiling corners and taking the garbage out everyday. Make sure you don’t criticize their work. In addition, don’t watch the entire time to see if something’s going wrong. Instead, show your partner how to do the things they don’t know how to do.

If you want a change, you will have to take the first step. If their attitude still won’t change, give them an ultimatum: Your no one’s maid or slave. Don’t let them treat you like one and don’t let them trample on your dignity and self-respect.

5 Cleaning Tricks if You Don’t Like to Clean
For people who don't like to clean, dividing tasks into small doses can be a great solution. You can use these simple cleaning tricks to help! Read more »
Link copied!
Interesting Articles
Relationships
Ways to Get Over Ghosting and Why You Shouldn't Ghost

Relationships
How to Put an End to a Toxic Friendship