Hemophilia in Women: Everything You Need to Know

Hemophilia in women increases the risk of heavy menstrual bleeding or postpartum hemorrhaging. We’ll tell you all about this condition in this article. 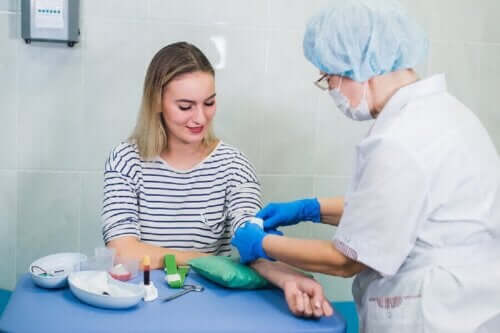 Hemophilia in women is a blood disorder that in very few cases becomes symptomatic. It’s a condition that alters how the blood clots. Therefore, these people are very sensitive to bleeding.

What happens is that this disease is linked to the X chromosome. Thus, most women are asymptomatic carriers and men more commonly suffer from the disease.

In this article, we’ll explain why it happens and how its clinical manifestations are.

What is hemophilia in women?

Before we talk about the peculiarities of hemophilia in women and inheritance, let’s explain what this condition is. It’s a genetic disorder that’s hereditary and linked to the X chromosome

Genes encoding coagulation factors, particularly VIII and IX, are found on the chromosome. These proteins allow blood to clot after an injury and thus control bleeding.

In this case, what happens is that either of these two factors doesn’t produce enough or it isn’t synthesized. Consequently, when wounded, whether internal or external, the blood takes longer to clot and therefore more blood is lost.

The problem is that these people are prone to severe bleeding after any minor bump or scrape. In fact, internal bleeding is the most worrying thing, as damage to organs and joints can occur due to bleeding.

Why is hemophilia not as common in women?

Hemophilia in women, as we have already pointed out, is a disorder that usually does not produce symptoms. However, there are indeed some women who express signs similar to men.

The X chromosome is the carrier of this disease. It’s one of the sex chromosomes. In women, there are two of these, while men have one X and one Y. In a male baby, the X chromosome inherits it from the mother and Y from the father.

Thus, when a man has a damaged X chromosome (which he inherited from his mother, a hemophilia carrier), the disease is expressed directly. It’s estimated that it affects one in 5000 newborn males.

However, for women, because there are two X chromosomes, the disease does not have to be expressed. That is, for a woman to be symptomatic, both chromosomes must have the gene that triggers altered hemophilia.

Women are most often carriers of hemophilia. In other words, they have an altered gene on one of the two X chromosomes. Because the other chromosome is normal, the clotting factor occurs, although at less concentration than usual.

Because of this, they manage to bleed as a healthy person. However, the risk comes when they want to have children, as they can pass the damaged X chromosome on. If this occurs and the child is a male, he will express the disease.

What are the consequences of hemophilia in women?

Although hemophilia in women is usually asymptomatic, there are cases where it isn’t. It often becomes similar to men, as other parameters influence the production of the clotting factor.

For example, if there’s any liver disease, pregnancy or stress may have a reduced concentration of any of these factors. When the concentration of factor VIII or IX does not reach 60%, hemorrhagic symptoms may occur.

In fact, the lower the concentration, the easier it is for bleeding to occur. For this reason, hemophilia in symptomatic women resembles mild hemophilia in men.

Studies show that women with this disorder have a greater tendency to bleed after surgery. They often have heavy menstrual bleeding or even postpartum bleeding.

Perhaps you’ll find this interesting: What are plasma transfusions?

What to do about hemophilia

Detection of this condition is relevant because it puts women’s health at risk. Therefore, any history of hemophilia in the family should be taken into account. Also, blood clotting factor concentrations can be measured. It’s ideal to do so during youth or childhood.

The prevention of bleeding is one of the key points to avoid negative consequences, especially when performing any surgery or during pregnancy. Therefore, doctors need to perform preliminary medical studies.

How to Treat Cystitis During Pregnancy with Home Remedies
Cystitis during pregnancy is very common since the anatomical characteristics of a pregnant woman favor this urinary infection. Read more »
Link copied!
Interesting Articles
Illnesses
Eczema and Stress: How Are They Related?