The Risks of Post-Operative Bleeding

Surgical interventions are associated with an increased risk of venous and arterial thromboembolism. It's also known that the temporary interruption of antithrombotics represents a higher risk of thrombosis and embolism. Read on to learn all about the risks of post-operative bleeding. 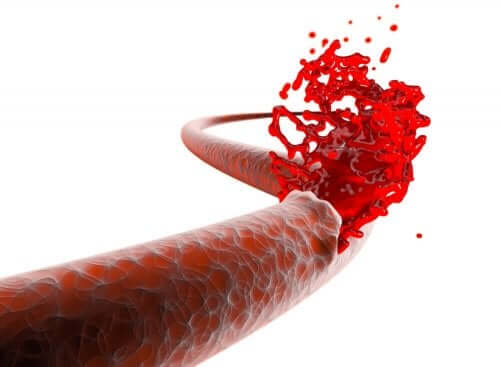 Injury or trauma can cause post-operative bleeding, which may also show itself in the form of blood clotting. The different types of blood vessels carry oxygen and nutrients to tissues. When blood vessels become damaged, bleeding can occur inside or outside them.

Hemostasis is the process that causes bleeding to stop in damaged blood vessels. The necessary factors for a clot to form include:

Surgery increases the risk of venous and arterial thromboembolism. Experts also know that the temporary interruption of antithrombotics creates a higher risk of thrombosis and embolism.

The risk of pre-operative bleeding induced by oral anticoagulants is usually low. However, it’s high during and after surgery, depending on the surgical procedure.

A risk assessment of a surgical procedure is necessary for these patients. For this reason, the type of antithrombotic treatment the doctor chooses will depend on the patient’s condition.

In these cases, doctors can opt for continuing or interrupting the anticoagulant therapy. If they choose to interrupt it, they should prescribe heparin and then restart the therapy with oral anticoagulants. This is due, above all, to post-operative immobility, but also to the prothrombotic effect of the surgery itself.

You may also enjoy the following article: How to Treat Postpartum Hemorrhages

Major bleeding is severe bleeding that needs a transfusion of at least two units. It can also be intracranial, intrathoracic, or peritoneal bleeding.

When faced with a bleeding complication, the treatment the doctor will choose will depend on the extent and location of the bleeding. Also, the levels of anticoagulation play an important role. Fatal or life-threatening bleeding is also considered major.

The chance of bleeding will also condition the reintroduction of post-operative antithrombotic therapy since the beginning of anticoagulation in cases of high bleeding risk will vary. If suppression of anticoagulation is continued for more than a day, the medical professional may have to consider administering heparin.

This article may interest you: Do You Need to Raise Your Platelet Count? These 4 Remedies Can Help

Resumption of anticoagulant therapy after surgery

Anticoagulant therapy should be resumed two to three days after surgery. However, you should always consult with your doctor.

You should start with low doses, meaning those used in prophylaxis, two to three days after surgery. You should start therapeutic doses after 48-72 hours, only if you’re not suffering from continuous post-operative bleeding.

Most patients treated with both warfarin and acenocoumarol can resume anticoagulant therapy on the night of the surgical intervention, as long as they’re not suffering from bleeding complications.

However, the therapeutic effect won’t begin until four to five days after having started anticoagulant therapy. One of the main goals for the patient who has been through anti-coagulation is to recover their antithrombotic state as soon as possible. Medical professionals must take adequate post-operative hemostasis and the risk of bleeding associated with the procedure into account.

In general, most post-operative hemorrhages resolve within 24 hours of surgery. However, this may not always be the case, which is why anticoagulation shouldn’t be started until hemostasis returns to normal.

This Gel Stops Bleeding in Only 10 Seconds
Have you heard of the amazing properties of VertiGel? In this article, learn all about this innovative gel that stops bleeding in only 10 seconds. Read more »
Link copied!
Interesting Articles
Illnesses
Types of Diaper Rash: Symptoms and Treatment

Illnesses
Changes in Eye Color Can Be Cause for Concern

Changes in eye color are a rare phenomenon that would alarm anyone. The eyes are one of the most striking…

Medication
Antidepressants and Alcohol: What Effects Does Combining Them Have?

Many people combine antidepressants and alcohol without knowing that this combination of substances can have serious health consequences. In addition,…

Pregnancy
How to Treat Cystitis During Pregnancy with Home Remedies