The Anticoagulant Properties of Garlic

Garlic belongs to the same family as onions and leeks. Notable for its strong smell and flavor, it's used as a seasoning in many recipes. 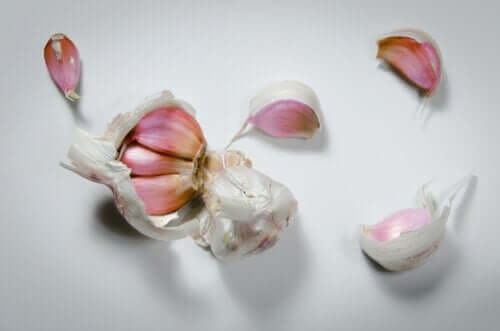 For years, garlic has been a widely consumed food in many countries around the world. In fact, it’s the main ingredient of the Mediterranean diet. It helps enhance the flavor of dishes and is an ingredient in many true delicacies.

While it it is a mainstay in the culinary field, in terms of alternative medicine it has proved to be a very divisive plant. All kinds of properties have been attributed to it and its nutritional value has been distorted on more than one occasion.

Let’s learn more about this food and the properties that are often attributed to it, which have caused so much confusion.

Garlic, a food with a thousand myths around it

According to experts from the Spanish Nutrition Foundation, garlic is a source of protein, iodine, phosphorus, potassium, vitamin B6 and sulfur compounds. They recommend eating it as part of a healthy diet.

However, it doesn’t help “fight chronic infections“, nor does it prevent or cure cancer (or any other disease). Nor does it work as an adjuvant treatment. Nevertheless, it’s a very nutritional food that also adds a distinctive flavor to seasonings.

The experts of the Universitat Pompeu Fabra comment as follows:

“The available scientific evidence is not of sufficient quality to confirm the relationship between garlic intake and decreased cancer risk. Rigorous clinical trials are needed to determine the true effect of garlic intake on the prevention of this disease”.

These same statements apply to cardiovascular diseases. Eating a clove of garlic on an empty stomach every morning will not reduce the risk of disease. Nor will it reduce the impact of oxidative stress or prevent premature aging.

We recommend you read: The Incredible Benefits of Garlic and Honey on an Empty Stomach

Allicin, the sulfur compound in garlic

Allicin is a sulfur compound contained in this food. It’s responsible for its characteristic smell and taste and traditionally people believed it had great potential from a medicinal point of view. For this reason, multiple studies have investigated its properties down the years.

In a study published in 2007, the authors made the following comments:

“It appears that although almost all garlic components have antioxidant qualities, the components with the greatest capacity could be S-allyl-cysteine and allicin, and it seems the antioxidant effect is dose- and time-dependent.“

The researchers agree that, although garlic has compounds with potential for different issues, this potential has only been observable under certain laboratory conditions. This means they don’t work in every case, but only under very specific circumstances.

To take advantage of the properties of garlic, it is best to consume it as part of a balanced diet. You don’t need  to consume a certain amount on an empty stomach, or crush it, or eat it in any other specific way.

If scientific evidence is discovered that indicates that it’s beneficial to consume a certain amount of garlic at a certain time, then we’ll rethink the best way to get all the advantages of this food. For now, integrating it into a balanced diet is enough.

In short, if you want to consume garlic, it should be because you like its flavor in your dishes. Not because it will help you prevent or cure diseases.

Does garlic have anticoagulant properties?

According to some beliefs, garlic has anticoagulant and vasodilator properties. This is why it’s often recommended in popular circles as a “natural remedy” to prevent cardiovascular problems.

However, there’s no scientific evidence to indicate that such beliefs are correct. In fact, according to experts, consumption of this food can actually cause interactions with certain drugs, such as anticoagulants. Therefore, patients taking warfarin should avoid it.

According to a study published in 1963 in Korea, garlic contains a substance with an anticoagulant effect, but only in isolated cases. Although this research looked promising, with time and further study scientists decided they can’t be sure that garlic has anticoagulant properties.

Instead, what we do know is that garlic is a food with potential, but only under certain conditions.

Delicious Homemade Garlic Sauce Recipe
Garlic sauce is an excellent choice to go with many hot dishes. The following is a simple homemade garlic sauce recipe with some extra versions.  Read more »
Link copied!
Interesting Articles
Naturopathy
What Is Colloidal Oatmeal and What Are Its Benefits?