The Genetic Origin of Sex: the X and Y Sex Chromosomes

In humans, one of the X chromosomes is inactive in females, and therefore, it doesn't show up. Lyonization is a direct consequence of this phenomenon 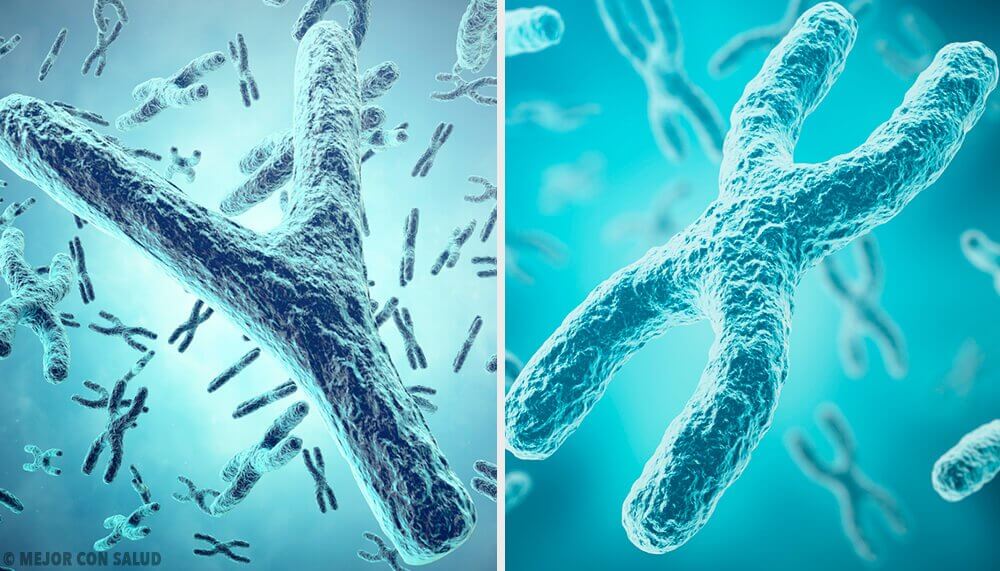 Sex hormones are responsible for giving a person the physical characteristics of their genetic sex. Naturally, the way they work differs depending on each person’s sex chromosomes.

In light of the above, men and women have a different number and type of sex chromosomes.

Males have XY and females have XX. These chromosomes contain the keys that trigger the regulation of sex hormones in men and women, which their sexual characteristics will depend on.

In organisms that have a different number number of sex chromosomes for men and women, a process has been developed that eliminates the difference in the number of gene doses linked to the X chromosome. This means that because females have two copies of the X chromosome, the genes bound to it will be duplicated. That is, this happens unless one of them is inactivated.

The goal is to maintain expression levels of genes linked to this chromosome that is similar in males and females. This process is called gene dosage compensation.

Gene dosage compensation has been studied in different model organisms, such as in the fruit fly (Drosophila melanogaster) or in the house mouse (Mus musculus). Overall, these studies led to the discovery that the mechanisms that mediate the compensation process is different between them.

In the case of mammals, sex determination is based on the Y chromosome. This means that a person will develop the typical male characteristics if they have this chromosome.

A clear example of this is Klinefelter syndrome.

People who suffer from this syndrome have 47 chromosomes: 22 pairs of autosomal chromosomes and 3 sex chromosomes (XXY). As you may know, this is one sex chromosome more than what people usually have. These people normally develop the typical male characteristics, which supports the theory that the Y chromosome is what marks the process of sex determination.

In fact, in many cases those who have this disorder are not aware that they suffer from this syndrome until they become an adult and start showing the typical symptoms of this condition (infertility, excessive breast development, etc.). Overall, Klinefelter syndrome is a genetic disease that is more common in males.

How does the X chromosome inactivation process happen?

In theory, during the X chromosome inactivation there are two possible mechanisms to follow:

In people who suffer from this syndrome, two of their X chromosomes randomly inactivate. This supports the theory that the mechanism which governs the chromosomal inactivation process is the selection of the X chromosome that will remain active.

Overall, the silencing of the X chromosome is an epigenetic phenomenon that has intrigued scientists for decades.

In general, the vast majority of genes express themselves in two chromosomal copies (remember that the human being has 22 pairs of autosomes). However, this is not possible in sex chromosomes. This is because the number of X and Y chromosomes differs between the two sexes.

Murray Barr and Ewart Bertram, two Canadian scientists, discovered in 1949 that it’s possible to determine a person’s sex based on the presence or absence of a condensed corpuscle that appears in the cells of females.

It refers to what’s now called Barr’s corpuscle. This is nothing more than the inactivation of one of the two copies of the X chromosome in females. It refers to chromosomal hypermethylation ,which makes the chromosome it affects visible under the microscope.

According to the hypothesis of Lyon, a British geneticist specializing in these phenomena, the inactivation process in mammals is random. In some cells, an X chromosome inactivates. However, in others it will turn into a different one. Actually, the randomness of this process contributes to genetic variability. Therefore, it is interpreted as a positive aspect.

In addition, Lyon observed that cats whose fur coats had different colored spots were mostly females. Actually, the different colors were due to the random inactivation of one of their X chromosomes. In honor of this geneticist, this phenomenon was called lionization.

5 Tips for a Better Sex Life
If you want a better sex life, here are some tips that can get you there. Everything from exercise to food, we'll talk about it here. Read more »
Link copied!
Interesting Articles
Anatomy and physiology
The Causes of Bradypnea and its Treatments