What Are Plasma Transfusions?

Donating plasma is a simple act that helps treat different pathologies. How can you do it? Who benefits from plasma transfusions? We'll explain more here. 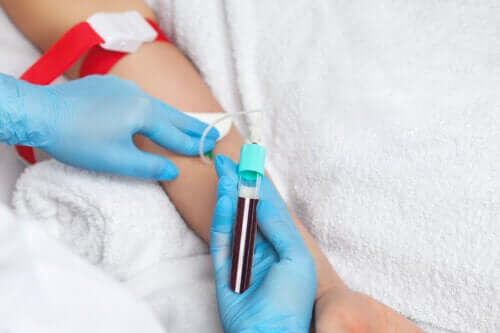 Plasma is almost 55% of the total volume of our blood. The other part is made up of cells like red blood cells, white blood cells and platelets. In this liquid there are many proteins, like albumin, which perform very important functions in the body.

Although many people don’t realize, plasma transfusions can treat many pathologies, like bleeding or burns. In this article, we want to explain what this procedure consists of and why it’s so important to donate blood.

What is blood plasma?

As we’ve already mentioned, plasma is the liquid part of the blood, which combines with the blood cells, both red and white, and the platelets. When the two parts are separated, the plasma looks like a transparent liquid.

Plasma is almost 90% water. However, the rest of its composition is a mixture of proteins and mineral salts that are essential for the body to function properly.

First, it contains immunoglobulins, which are the part of the immune system that helps protect you against infections. In addition, there’s also albumin, which is a molecule that’s responsible for transporting certain substances to the tissues.

In the same way, it’s important to note that plasma also contains coagulation factors. This is what helps the blood to start to clot when there’s a hemorrhage somewhere in the body.

How do plasma transfusions work?

Plasma transfusions are actually very simple procedures. First, there needs to be a donor. If you want to donate, it needs to be an altruistic and selfless act. Here, the nurse will extract the blood from the donor, with the process usually lasting between 30 and 45 minutes.

After the blood is drawn, the blood cells are separated from the plasma. Then, they preserve and store the liquid. When it comes to plasma-only donations, it’s called plasmapheresis.

The latter differs from donating blood in that the extracted cells are reintroduced, and they only keep the plasma. In addition, the recovery is shorter and you can donate every fifteen days.

Also, it’s important to note that to perform a plasma donation, the donor and the recipient must have the same blood type. This is because, in plasma, there are proteins that could cause the body to reject the donated blood.

Check this out: High Levels of Monocytes in the Blood: Symptoms and Treatments

What is it for?

In addition, since plasma has clotting factors, this technique makes it possible to stop bleeding more quickly. In fact, it’s especially useful in people who suffer from diseases like hemophilia, caused by the lack of any of these factors.

Also, it’s used in liver transplants. However, techniques have been developed in which, instead of introducing all the plasma, they only use the molecules they need. They are called blood products.

For example, for someone with hemophilia, the clotting factor that the person needs can already be transfused. Although plasma transfusion is a safe technique, it has more drawbacks than if you only transfer blood products.

What we need to keep in mind is that plasma transfusions are simple procedures that can save many lives. Therefore, it’s important that we’re all aware that by making a simple donation, we can help many people.

Why It’s Important to Donate Blood in the Summer
Why it’s important to donate blood. It's such a selfless act and helps save so many lives every year. Discover why we need donors now more than ever. Read more »
Link copied!
Interesting Articles
Anatomy and physiology
Why Are Some People More Sensitive to Pain than Others?