For many years, cow’s milk has been one of the most controversial foods with regard to its supposed benefits and nutrition value. Thus, although the majority of people have considered it an essential part of their diet, there are recent studies which show that the consumption of cow’s milk can be detrimental to our health. 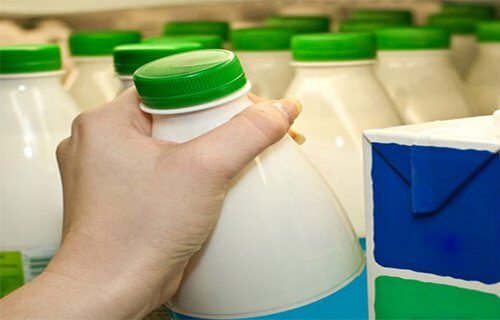 might like:We all know whole milk has quite a bit of fat and calories, so low-fat milk is a good substitute if we want to watch our weight and be healthier, right? Actually, there is more to it than that. According to research Harvard research, low-fat milk could actually be doing you more harm than good.

On a mission to lose weight or stay in shape, many people opt for low-fat milk or other dairy products derived from it. That way, they can still enjoy the delicious flavor of milk and its “benefits” but not consume too much fat.

However, David Ludwig, a scientist at Harvard University, did a study that questioned the supposed benefits of milk, especially non-fat and low-fat milk.

The study, which was published in the American Medical Association of Pediatrics magazine, revealed that when the fat is extracted from milk it is replaced with sugar, which can potentially be more damaging in the long run.

Doctors and researchers have long warned people about the dangers of consuming sugary drinks. However, they have never included low-fat milk on the list.

Dr. Ludwig questioned the justification for promoting low-fat milk since all beverages containing calories and sugars should be treated with the same precaution.

This study coincides with many others which concluded that humans do not have a nutritional requirement for cow’s milk. Actually, it can even be very damaging to the human body.

Cow’s milk became popular due to its calcium content, which is, according to many experts, essential for healthy bones.

However, there are other foods which contain more calcium than cow’s milk and do not have the negative effects on your health that cow’s milk can have long-term.

A few good examples are broccoli, kale, and arugula, among others, which have more than 160 mg of calcium per portion. Also, sardines, nuts, seeds, and legumes can provide significant amounts of calcium.

Therefore, it’s not necessary to consume great quantities of milk to maintain healthy bones. Instead, people should increase their consumption of the other high-calcium foods we mentioned.

The argument against the consumption of low-fat milk has become even clearer.

Harvard clinical studies have shown that consuming low-fat milk instead of whole milk makes people more likely to gain weight. Why? Low-fat leaves you unsatisfied and you have a greater need to consume additional calories.

Where Does Milk Come From?

Nowadays, many nutritionists continue to recommend that their patients consume “low-fat” milk when they are trying to lose weight. However, new studies have revealed that low-fat milk is not nearly as healthy as advertising claims it to be.

Experts suggest that it is better to consume whole milk, provided it is organic.

Dairy products can help improve heart health, the treatment of diabetes, the absorption of vitamins, and reduce the risk of colon cancer. However, before claiming that milk is good for our health, we must first ask ourselves something. Where does milk come from?

The high quantity of hormones given to cows nowadays to increase their milk production has significantly altered the product. Milk has truly become a risky and possibly very dangerous product to consume.

Many of us ignore the dangerous effects that milk can have on the body. However, we should be aware that since things have changed in the last few decades and technology has affected food production a lot, we must question the products we find on the market.

We especially need to be aware of manipulated animal products such as non-fat or low-fat milk.

How is breast milk produced?
Pregnant women tend to quickly notice changes in their breasts appearance and sensitivity. Yet, many are unaware of the physiological process of producing breast milk. There let's get you acquainted with the female breast anatomy and the transformation that enables milk production. Read more »
Link copied!
Interesting Articles
Nutrition
How Much Protein Should I Take if I Exercise?

One of the keys to enjoying a good quality of life is good nutrition. The best way to do it…

Nutrition
Types of Proteins and Their Functions

Do you know all about the different types of proteins? Protein is an essential macronutrient for human beings. It must…

Nutrition
Steel-Cut Oats: What Are They and How to Prepare Them?

Steel-cut oats are a type of oat that's characterized by flakes that are smaller than the traditional version. It's very…