What Happens to Your Body if You Drink Green Tea Every Day?

Scientific evidence supports many of the health benefits of green tea. However, it's important to note that it's not without its contraindications and side effects. 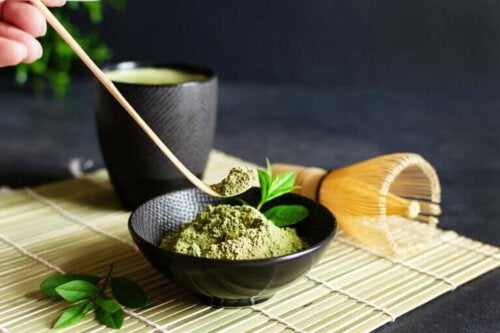 Have you ever wondered what happens to your body if you drink green tea every day? Green tea is a natural drink that has become popular around the world for its interesting medicinal properties. While it’s not a first-line treatment for disease, recent research does support its beneficial properties.

Unlike other types of tea, green tea doesn’t go through fermentation processes. As a result, it’s able to retain all of its antioxidants and polyphenols. For that reason, the consumption of green tea is linked with increased well-being, and the prevention of chronic diseases. Below, we’ll discuss its benefits in more detail.

According to information published in Chinese Medicine, green tea has shown positive effects in the prevention of various diseases. Specifically, many of its medicinal properties are attributed to its catechin content, especially epigallocatechin-3-gallate.

In addition, this same journal highlights that green tea is a source of:

Therefore, it’s not surprising that it’s considered a good supplement for improving the quality of one’s diet. However, it’s essential to clarify that it isn’t a substitute for medical treatments and doesn’t have “miraculous” properties. Its consumption should be considered a complement.

If you’re suffering from any kind of health problem, the best thing to do is go to the doctor, who can explain all the available treatment options. If you drink green tea on a daily basis, you should let your attending doctor know, as it can interact with some kinds of medications. Now that we’ve made that clear, let’s go over the benefits of green tea in more detail.

Scientific evidence supports the nutritional properties of green tea. Today, it is recognized for its contributions to health and well-being.

It can help with weight loss

The high concentration of polyphenols in green tea is connected to its ability to improve metabolism and reduce weight. These antioxidant substances increase energy expenditure and prevent the body from storing calories as fat. However, you should combine it with a healthy diet and physical exercise.

You should also read: The 7 Best Fat Burning Beverages

Favors the prevention of diabetes

According to a publication in Integrative Medicine Research, the antioxidants in this natural drink may help control blood glucose and prevent type 2 diabetes. In addition, drinking it every day after eating prevents insulin peaks and the storage of sugars in fat.

A small cup of green tea every day can lower the risk of various kinds of cardiovascular disease, such as the accumulation of cholesterol, and circulatory disorders.

According to research published in Current Medicinal Chemistry, its antioxidant substances, specifically catechins, can lower the risk of blood clots, reduce clogging of the arteries, and help prevent the build-up of lipids in the blood.

As a result, its consumption is also associated with a lower risk of conditions such as heart attacks, strokes, thrombosis, and angina pectoris, among others.

The antioxidants in green tea create a protective barrier against the harmful effects of cell degeneration. They also stimulate the activity of neurons. According to research published in the journal Molecules, green tea may help to prevent and treat neurodegenerative diseases, including cognitive dysfunction and memory loss.

A little green tea every day can help prevent renal calcification and kidney stones. In addition, according to a study published in the Journal of Urology, its extracts reduce the production and size of calcium oxalate sediments. These sediments settle in the kidneys and form kidney stones.

Catechins, a type of chemical antioxidant found in green tea, help fight the viruses and bacteria that cause throat infections, cavities, and other mouth conditions.

According to the findings of a study published in the Journal of Clinical and Diagnostic Research, green tea mouthwash was shown to be just as effective as chlorhexidine in fighting bacteria such as Streptococcus mutans.

Do you drink green tea everyday? Here are some of its contraindications

The beneficial properties of green tea are backed by research. However, it’s not without its contraindications and side effects. Its consumption shouldn’t exceed two cups a day, since it may have negative consequences such as:

You should also avoid green tea if you’re on medication or drinking alcoholic beverages. This is due to its caffeine content. When you combine caffeine with other substances, it can cause undesired effects.

5 Best Teas for Peaceful Sleep
Have you ever wondered what teas will help you sleep better? Have you tried a few and they didn't have positive results? Have you drunk some teas and you couldn't fall asleep? It's possible that you are not preparing them correctly. Read more »
Link copied!
Interesting Articles
Medicinal plants
3 Turmeric Remedies for Rheumatoid Arthritis

In this article, we propose three turmeric remedies for rheumatoid arthritis. This medicinal food has pain-relieving and anti-inflammatory properties that…

Medicinal plants
The Use of Arnica: Benefits and Contraindications

According to popular literature, the benefits of arnica vary greatly. This is a plant from the family Asteraceae that's native…

Verbena is a wild medicinal plant considered invasive in certain ecosystems. It has many applications in popular medicine as it…

Medicinal plants
The Benefits of Cardamom According to Science

The benefits of cardamom have been documented for hundreds of years. However, it wasn't until a short time ago that…

Medicinal plants
The Benefits and Contraindications of Marjoram

Marjoram (Origanum majorana) is an herb known in Mediterranean cuisine for its aromatic nature. The plant belongs to the Lamiaceae…

Interesting Articles
Illnesses
What Are the Types of Cerebral Palsy?

Brassicaceae, also known as Cruciferae is one of the healthiest vegetables in the world. This is because this group has…