Gonorrhea is a very common STD. In many cases, you do not notice any symptoms and this can increase the risk of giving it to other people. Because of this, prevention is very important. 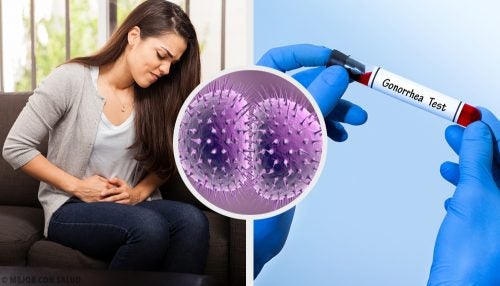 Gonorrhea is a sexually transmitted infection (STI) produced by the bacteria Neisseria gonhorrhoeae. This is also known as gonococcus. Unfortunately, it is one of the most common STIs in our society.

A very important factor to keep in mind is that carriers do not show any special symptoms. That is why it is known as an asymptomatic condition.

In general, those individuals who are infected are unaware of their condition (since they do not have any symptoms), and they therefore do not know that they need to treat it. Because of this, the illness spreads.

From the clinic’s view, it is necessary to make a distinction according to the patient’s sex and age. That means, the distinction is made between the disease in men, women and children.

Less than 10% of men are asymptomatic. The other 90% that remain develop symptoms when they contract gonorrhea. After a week’s incubation period, the following symptoms appear:

More than half of women are asymptomatic. However, when a woman shows symptoms, they are usually more serious than those found in men. Also, the probability of things getting more complicated increases. The symptoms in women are:

In women, the greatest risk is that the infection spreads. This can cause pelvic inflammatory disease (PIE) which is painful, is often chronic, and can also cause infertility.

Ultimately, the greatest complexity of the female reproductive system is that any part of it can be affected. Also, by communicating with the abdominal cavity, the infection can easily spread to other parts of the body.

During birth, gonorrhea can transmit to the baby if its mother is infected. This occurs when the baby comes in contact with the secretions and mucous of the birth canal of the mother, which are contaminated.

In the majority of cases, infected babies develop a type of conjunctivitis known as Oftalmia neonatorum or neonatal ophthalmia.

Currently, this type of conjunctivitis is not very common since when the babies are born, their eyes are cleaned with erythromycin eyedrops or silver salts. This helps to avoid any type of complications.

There is also the possibility that, through gonorrhea, other complications may develop. However, it is true that these show up less often and exclusively depend on the individual’s sexual practices.

In the case of women, in addition to the mentioned procedure, the doctor will ask the patient to do a vaginal cytology. This will deeply evaluate the condition to guarantee the most precision when it comes to the diagnosis.

Similar to the rest of sexually transmitted infections, the number of cases of gonorrhea has increased in the past few years. This may seem ironic since preventative methods (like condoms) are right at our fingertips, but it is the truth.

During the 80s, in the middle of the AIDS crisis, the fear of contracting it pushed people to use preventative methods. Later, with the appearance of effective treatments, and with new contraceptives, there is less fear when it comes to STIs. This explains the increase in the number of cases.

In respect to the treatment of gonorrhea, it is through medications. Specifically, the treatment is based around the administration of antibiotics to the patient. Generally, cetriaxona is prescribed with doxicilina since the latter also covers the spectrum of chlamydia.

Also, all sexual contacts should be studied and treated, regardless if they are asymptomatic. The doctor may also suggest that the patient abstain from sex until the they treat the problem.