Although Gilbert's syndrome is the result of an inherited anomaly, the truth is that it doesn't actually cause any adverse health effects. 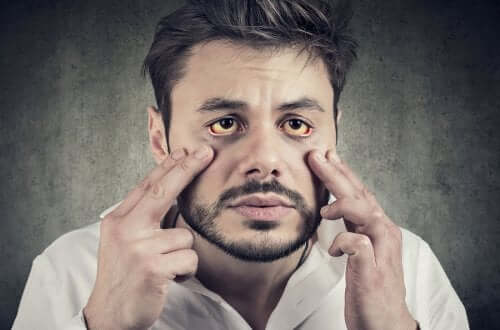 According to statistics, Gilbert’s syndrome is a condition present in 1% of the world’s population. However, it occurs between 5 and 10% of some populations. It’s a hereditary problem, which normally appears in adults between ages 20 and 30.

Gilbert’s syndrome is most often found during a routine blood test. The disease was described for the first time in 1902, by Augustin Nicolas Gilbert and Pierre Lereboullet. In fact, this is where it got its name.

Gilbert’s syndrome is a benign, but chronic condition. It’s due to a hereditary genetic mutation. Many people with this disease don’t know they have it, since it doesn’t have obvious symptoms.

Gilbert’s syndrome is an inherited condition, characterized by high levels of bilirubin in the blood. Also, it’s known as constitutional liver failure and familial non-hemolytic jaundice.

It’s a dysfunction where the liver doesn’t process bilirubin like it should. However, Gilbert’s syndrome is harmless. We should mention that bilirubin is a substance that comes from aging red blood cells, and the liver processes it.

Normally, the body flushes out bilirubin through fecal matter and urine. When bilirubin levels rise, the liver can’t process it properly. Due to this, the skin and tissues absorb this substance.

Check this out: Everything You Need to Know About Liver Detox Diets

Gilbert’s syndrome is a consequence of the reduced ability of hepatocytes (liver cells) to excrete bilirubin. When red blood cells age and deteriorate, they release hemoglobin. This metabolizes and formes a group of substances called “Heme.”

Heme first transforms into biliverdin, then into something like a first version of bilirubin. This is called “unconjugated” or indirect. Then, when it passes through the liver and combines with glucuronic acid, it causes a reaction that results in direct or conjugated bilirubin.

If the process happens properly, the bilirubin becomes water soluble, and leaves the body in the bile. However, there’s a mutated gene in some people that prevents the normal production of the enzyme that regulates bilirubin production. This then leads to Gilbert’s syndrome.

Symptoms and diagnosis of Gilbert’s syndrome

The main symptom of this condition is jaundice, which is the yellowing of the skin and eyes. In fact, this becomes more visible during high-stress situations, when there’s prolonged fasting, during the course of infectious diseases, or when exerting a lot of effort.

Additionally, another symptom is the inability to process some substances, especially drugs. In particular, some people with this disease have an increased risk of toxicity from the drug paracetamol.

Check this out: 6 Diets that Help Care for Your Liver Health

Gilbert’s syndrome doesn’t require any type of treatment, since it doesn’t cause damage. Therefore, it’s considered benign. This dysfunction doesn’t affect quality of life, and it often goes unnoticed.

In addition, it doesn’t cause complications, and doesn’t require a special diet. The only thing you need to watch is taking certain drugs, like paracetamol.

As we already mentioned, with Gilbert’s syndrome, there’s an increased risk of liver effects from ingesting some drugs. Apart from this, a person with this condition can lead a completely normal life, without needing special care.

Jaundice can appear and disappear several times throughout the person’s life, without posing any health risks. Then, once you have the diagnosis, you don’t need any type of medical follow-up for this condition.

5 Tips To Protect Your Liver Health
In this article we'll share some tips to protect your liver health. That way you can improve your health and ensure a better quality of life. Read more »
Link copied!
Interesting Articles
Illnesses
Eczema and Stress: How Are They Related?