As You Get Older, You Realize Some Battles Aren't Worth Fighting

Don't bend over backwards for things or people that aren't worth fighting for. We should only fight for things that bring happiness into our lives. 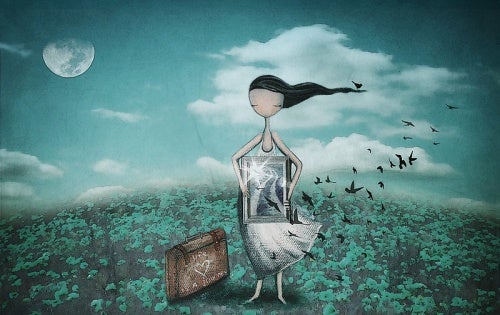 As time goes by, we realize that some battles are just not worth fighting. We give up on many conversations, on the dreams we had in our youth, and even on certain people.

Instead of viewing these facts as losses, we should see them for what they really are: things that we put a lot of hope into, but then realize that they were, in fact, not worth fighting for.

Experiencing personal growth, maturing, and advancing in life as time passes, is like placing the pieces of a more or less perfect jigsaw puzzle together. It is what is important in the big picture

During a certain period in our lives, we take comfort in fitting impossible pieces into the wrong places.

Only time and hindsight makes us finally see the truth, which is that there are things and people that fit on different maps than ours.

In what follows, we suggest that you reflect on this.

Sometimes it’s necessary to lose battles not worth fighting

During our youth, many things come our way without us evening choosing them. It’s as if you’re water-rafting down a raging river, nervous and full of life.

One example of youthful mistakes we make is that we fall in love with the first person we see and they blow us away.

Another example is that we create friendships with people only because we see them often. For instance, these people could be classmates or friends of friends.

Accepting these people as friends is similar to the situation in which you’re served a meal that you end up not liking, but eat it anyway so as not to disappoint the person who cooked the food.

During this stage of our life, we act in this way because we only have one goal: to become integrated into a community. Or in other words, to fit in.

Young people may take their first steps in life by seeking validation from other people. This includes listening to what others say and following what they do.

However, as we get older, things change. There comes a day where we become selective when choosing friends or battles to fight—very selective. In other words, we know exactly what we want and who we don’t want in our life.

We recommend: The Best Tips to Let Go of People Who Don’t Love You

In the end, the day when we have a few true friends instead of many fake friends arrives.

We take a look back while we assess our emotions. However, the right thing is to take a look at what your heart is telling you, as it helps you to recognize certain things. For example:

You only need to show one person that you’re good enough and that person’s you. If certain people don’t love you, the last thing you should do is beg for their love.

Read also: Self-Love 101: How to Love Yourself

To mature is to experience personal growth

There are battles that are completely not worth fighting. Fighting them is like contradicting yourself. Furthermore, it’s like trying to get certain people to change their mind or be like someone you wished they were.

We do this to gain something more important: dignity.

These types of personal steps are not easy to take. For instance, there are still many people who continue to fight impossible battles with things that destroy them and their self-esteem.

How to quit battles not worth fighting

Unfortunately, sometimes we think that the dignified choice is to continue fighting for impossible relationships.

For instance, we’ve all had friends who we’ve hung out with, but keep on betraying us time to time again.  Or maybe we tell ourselves that, as good a daughter, niece or cousin, we must give everything to our family.

However, many of these battles are already lost because they only bring us pain and because these people are never going to change, even though we think otherwise.

Although it hurts, sometimes it’s best to cut certain people of your life and get out of those “toxic environments” that destroy our self-esteem. Bear in mind that those who hurt you most, simply don’t love you.

Remember that bold people do not put all their effort into something without getting anything in return.

Instead, they are able to fight the battles worth fighting in this life: their own happiness and the happiness of their loved ones.

I’m Reaching for the Stars With or Without You
When we talk about romantic relationships, we immediately think of a package of two people. However, we forget that those two people are independent. Because I can live just the same with or without you.  Read more »
Link copied!
Interesting Articles
Sex
Ten Common Questions about Sexuality