This Gel Stops Bleeding in Only 10 Seconds

Have you heard of the amazing properties of VertiGel? In this article, learn all about this innovative gel that stops bleeding in only 10 seconds. 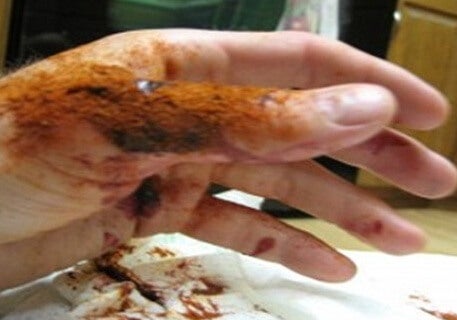 Have you heard about the amazing gel that stops bleeding?

They call it Vetigel, and it has a surprising story behind it.

The Story Behind the Gel that Stops Bleeding

Joe Landolina, a young 17-year-old entrepreneur had recently started school at New York University when he made a discovery that could possibly save thousands of lives all over the world.

Landolina, who stated that he was very interested in tissue engineering (or regenerative medicine), created a gel that is capable of instantly stopping internal and external hemorrhages in less than 10 seconds, without having to apply pressure.

The product, VetiGel, started as a project when Joe had barely begun his first semester at university.

Later, the idea was the winner of a contest held by New York University. Thanks to that, Landolina and Isaac Miller (his partner) received enough money to fund their business: Suneris, Inc.

Today, Joe Landolina is ready to take the reins of his own business.

He has a Masters in biomedical engineering and a company that employs 10 people. All of this is set to get this project off the ground, because it could be a key device for saving lives in emergency services and ER rooms throughout the world.

Veterinary clinics have already tested the gel. Currently, there are around 1,600 more veterinarians that hope to be able to use the product samples to do a critical analysis.

Vetigel: The Gel that Stops Bleeding

What is Vetigel Made of?

The gel is made up of something that has vegetable-like origins called extracellular matrix (ECM). It’s a net of proteins and sugars that come from around cells, which could vary from one organ to another.

The gel splits into small pieces, as if they were lego pieces. When they put it on a wound, it can rebuild the existing ECM pattern.

Vetigel will make an exact copy of what it’s next to. In other words, it’ll immediately adapt itself to the properties of the part of the body it is used on.

Additionally, according to Landolina, “Depending how it’s applied, the body will start the healing process.”

Vetigel samples will be first tested by veterinary clinics, who have already demonstrated its effectiveness in stopping bleeding in a matter of seconds.

Then, the product will go onto the United States military. They will give the final approval before its launch into the market for surgical use.

Landolina states that he is optimistic and believes that Vetigel could be approved in the market soon. This product could turn into a lifesaver in ER rooms and surgeries all over the world.

Vetigel could stop hemorrhages during vascular surgery of grade 4 hepatic trauma. With this powerful gel, surgeons could contain these types of hemorrhages in less than a minute, which is key to having a successful surgery.

It has an important benefit like the ability to stop bleeding in a matter of seconds. Thus, Vetigel technology also has other important applications in the treatment of burns, wound healing, and other therapy.

Studies on the benefits are on-going and Suneris continues performing different studies related to the benefits of Vetigel for health.

Authorities haven’t approved the product for sale yet. However, the results it has had up to now seem very promising, especially because of its ability to stop hemorrhages.

Its creators did not say what its price would be and the conditions of sale. However, it’s a very important finding for medicine and it could possibly be key in saving many lives in the future.

But did you know there is also another natural way to help stop bleeding for minor wounds?

Believe it or not, cayenne pepper also stops bleeding.

In addition to the gel that stops bleeding, there are natural alternatives. One of them, and perhaps the most effective one, is red pepper or cayenne pepper.

This spice has huge health benefits and native Americans have used it as medicine for a long time.

The use of cayenne pepper is very simple:

It’s important to keep in mind that the pepper itself should only be used on small cuts or scratches.

14 Reasons for Bleeding Gums
There are many reasons for bleeding gums and in today's article we look at 14 of them for you to look into and change if necessary. Read more »
Link copied!
Interesting Articles
First aid
First Aid Treatment for Carbon Monoxide Poisoning

How many times have you been faced with an injury and not known what to do? In this article, we'll…

First aid
Should You Pop Blisters?

A blister is a raised and palpable skin lesion which forms in the epidermis and is filled with fluid. In other words, blisters are kind of fluid-filled sacks. It can…

First aid
How to Apply First Aid for Groin Strains

Are you an athletic person? Have you ever been diagnosed with a groin strain? "Groin strains" refers to a groin…

When sick, many people will feel like they have a higher than normal body temperature, along with other symptoms or…