The Functions of the Twelve Cranial Nerves

The twelve cranial nerves control and intervene in numerous movements and sensations that we carry out daily. They're very important so we'd like to share their characteristics and main functions with you. 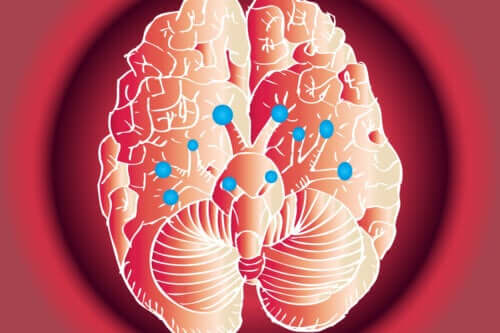 The twelve cranial nerves allow us to perform daily tasks comfortably and efficiently. They carry some of the information from our senses to the brain and from the brain to some of the muscles, and vice versa.

These nerves pass through small openings at the base of the skull that are connected to the brain. They branch out to different parts of the body to perform their functions from there.

We can group the 12 cranial nerves below in a simple way in relation to their functions. Thus, the optic, olfactory, and vestibulocochlear nerves are quite sensitive.

In addition, the oculomotor, trochlear, abducens, accessory, and hypoglossal nerves are completely motor. Finally, the trigeminal, facial, glossopharyngeal, and vagus nerves are both sensitive and motor.

Functions of the 12 cranial nerves

Before beginning to explain the function of each cranial pair, or cranial nerve, it’s important to know that the order of these is established by the Roman numeral belonging to the cranial nerve from the lowest to the highest.

This cranial nerve is responsible for transmitting olfactory stimuli from the nose to the brain.

Also, it originates in the cells of the olfactory bulb. Its main distinguishing feature is that it’s the shortest of the 12 cranial nerves.

Find out why Hydration is Essential for Your Brain

The main function of this cranial nerve is to conduct visual stimuli from the eye to the brain. It’s composed of the axons of the ganglion cells of the retina.

These carry the information from the photoreceptors to the brain, where it then integrates and is interpreted. The optic nerve has its actual origin in the diencephalon.

This one is also known as the common ocular motor nerve. The main function of this cranial nerve is to control eye movement. It’s also responsible for pupil size.

It originates in the midbrain.

As mentioned above, this nerve has motor functions, although it also has somatic functions. Furthermore, these nerves connect to the superior oblique muscle of the eye and can cause it to rotate and separate from the eyeball.

Moreover, these originate in the midbrain like the previous cranial nerve.

This nerve has mixed functions, i.e., both motor and sensory. One of its characteristics is that it’s the largest of all the cranial nerves.

This nerve is also known as the external ocular motor cranial nerve and it’s a motor nerve.

Furthermore, it’s responsible for transmitting motor stimuli to the external rectus muscle of the eye. It also allows the eye to move to the opposite side of the nose.

This is another mixed nerve and consists of several nerve fibers that perform different functions such as:

Do you know The Difference Between the Brain and the Mind?

This is a sensory nerve and also known as the cranial pair of the auditory and vestibular nerve, thus forming the vestibulocochlear nerve.

As you may have imagined, the function of this cranial nerve is to maintain balance and orientation in space. It’s also responsible for auditory function.

It also carries orders to the salivary glands and various neck muscles that facilitate swallowing.

Cranial nerve number 10 is the vagus or pneumogastric nerve. It originates in the medulla oblongata and innervates the following organs:

It’s also involved in swallowing and, in addition, sends and transmits signals to the autonomic nervous system. It can even help regulate our activation and control stress levels, among other functions.

We also know this one as the spinal nerve; it’s a motor nerve and one of the purest. It’s responsible for cephalic and rotational movement due to its innervation of the sternocleidomastoid muscle. Therefore, it allows rotation of the head and shoulders.

This is one of the cranial motor nerves which, like the vagus and glossopharyngeal nerves, also plays a role in the musculature of the tongue and the swallowing action.

The cranial nerves are important structures

Finally, as you can probably tell, these nerves have very specific and vital functions for life as we know it. Note that there are many diseases capable of injuring one or several of these nerves, giving rise to some of the characteristic clinical nerve symptoms.

Parts of the Brain and Their Functions
The parts of the brain and its functions have gradually become known and deciphered, but there are still many enigmas surrounding them. Read more »
Link copied!
Interesting Articles
Anatomy and physiology
A Fracture or a Sprain: What's The Difference?