Motor skill development progresses quickly from one month to the next throughout an infant's first year of life. Learn more about it in this article! 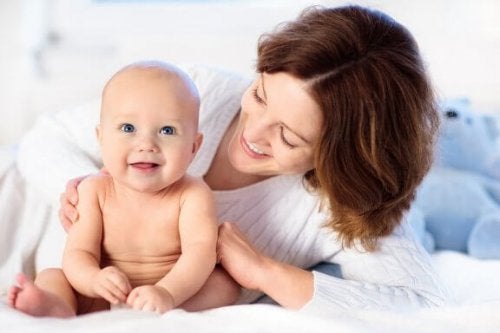 Motor skill development in a baby is usually rudimentary at the beginning, but it gets more intent and sophisticated as time passes by. Throughout the first year of an infant’s life, changes occur on a daily basis.

Obviously, each child will have their own rhythm. However, the milestones of motor skill development that we present below may be a good tool to assess your infant’s as they grow and they’ll help you determine if there’s anything you should help with.

The motor skill development of a baby is a very important indicator of possible problems in an infant’s brain. Moreover, this ability includes gross motor skills (arm and leg movements) and fine motor skills (hand-eye coordination).

That said, those who spend more time caring for a baby can often take better note of the motor skill milestones that a baby achieves. If your little one is in this stage, it may be a good idea to take notes or keep a journal.

Next, we’ll take a loot at what to expect regarding motor skills in the first few months of your baby’s life.

In the beginning, the infant’s arms and legs are flexed when they lay on their back. However, when they lay their stomach, they can do “crawl” movements and even lift their head for a few seconds.

At this stage, their head will fall back when you sit them up.

Meanwhile, their hands will remain clenched most of the time with their thumb inside the rest of the fingers. When someone touches the palm of their hand, they will grip the foreign hand or object.

At this stage of development, the baby can keep their head up and try to lift their body when they’re in a belly down position.

Also, they’ll move their legs and arms more gently when they’re on their back.

Their hands will be able to remain open longer.

By the third month, most babies can lay on their stomach and rest on their forearms while raising their head about 45 to 90 degrees. Also, their thighs are now stretched.

When lying on their back, they’ll be able to look at their body parts and grab their hands and test their heels on a surface.

When you hold them to sit, their back will be straighter.

Meanwhile, they’ll grab and shake anything you put in their hands and keep these open longer.

Now, the baby can keep their head up without support. Also, they’re able to push up with their legs when their feet are on a firm surface.

By month four, most babies can reach and touch any toys hanging above them. Similarly, they put their hands into their mouth.

When the infant’s facing down, they can roll over and face up. Likewise, they lift their body when facing down and rest on their elbows.

Read this article: How to Make a Baby Laugh

At this stage of development, a baby can rest on their hands and raise their trunk almost completely.

When they lay on their back, they can move their legs in a pedaling motion.

Now, they can be held by the arms in order to sit down and actively participate in doing so. When you hold them under the armpits and stand them, they can support themselves on their feet and push up against a firm surface.

Now, they can grab objects with their hands at will. In addition, they can exchange objects from one hand to another.

In the 6th month, babies can roll to both sides while laying down and turn on their back or turns on their stomach.

Also, they can start sitting without support for a few seconds.When they get up, they may lean on their legs and try to jump. When in a crawling position, the infant will rock back and forth and even try to crawl.

Furthermore, they may now be able to hold an object in each hand and bring everything into their mouth.

Ordinarily, when lying on their back at this stage, babies grab their feet and try to suck their toes.

Meanwhile, they can sit without support and are able to extend their hands forward to support themselves or to pick up objects.

Similarly, when held up under the armpits, they actively jump.

At this stage, they can interchange objects from one hand to the other. Likewise, they’re capable of holding an object between their thumb and their little finger. They can drop and throw objects at will.

At this month, the baby can sit by themselves and without support. Also, they can rotate and can get into the crawling position on their own.

Here, they start enjoying the game of throwing objects. Likewise, when they have an object in each hand and you offer them another one, they can release the one in their hand in order to take the new one.

Furthermore, they can start to munch on food without help while holding it with their hands.

Throughout month number 9, the baby will stand up while holding onto something.

Also, when put in a crawling position, they can effectively move around. Some may crawl.

They can now grab objects between their index finger and the base of their thumb. Similarly, they’re able to reach out and hand out objects to parents.

Now, they’ll begin to test the strength and musicality of objects by smashing them into each other.

Discover: 6 Things You Should Do With Your Baby Before They’re Born

Now, the baby is a pro at crawling and can support themselves perfectly on their hands and knees. They probably like to stand and try to walk by holding themselves on anything that makes them feel stable.

Also, they’re able to grab a sippy cup and drink its contents by themselves. Likewise, they can now hold objects between the tips of their index finger and thumb. They’re even now able to take out objects from a box and put them inside it.

Likewise, the baby can walk if an adult holds them from both hands.

They can now point out with their index finger. Similarly, they put their fingers inside holes and slits.

They’re now capable of throwing something for someone to catch. Furthermore, they can grab a spoon by its handle and bring it to their mouth – even if the movement is not very precise and the soup spills down.

The baby is now even able to applaud.

Here, the infant can typically walk if held by one hand. Subsequently, they can take their first steps without leaning on anything.

They can also bend over to pick up an object. Also, they may start enjoying the game of moving objects in and out of a box. While clamping their index finger and thumb, they can grab small objects individually. They can also now play with pieces that fit one another if you show them how.

In this stage, they’re able to take off their socks and try to put them on.

Keep in mind that, the development of every baby is different and that if your baby doesn’t reach one of these milestones at the exact month; then, they’ll likely reach it in the next. An infant’s motor skill development changes very fast throughout their first year of life, and each baby will get there it in his or her own time.

The important thing here is that you should pay attention and consult with your pediatrician if there’s something that seems abnormal.

Is it appropriate to provide probiotics to very young babies? What are the risks of changing an infant's intestinal flora? Before making any decisions related to pediatric health, it’s essential…

Babies
How to Manage Epilepsy and Breastfeeding

Generally, breastfeeding and epilepsy are recommended for all newborns of mothers with this condition. In fact, the use of antiepileptic…

Babies
How to Care for a Newborn Baby's Belly Button

How to care for a newborn baby's belly button is a common cause for concern, especially among first-time parents. However,…

Babies
Tips to Prepare for Your Baby’s Arrival

Preparing for your baby's arrival involves much more than simply buying a crib or a changing table. Parents, siblings, and…

Babies
The Symptoms of Regurgitation in Babies

Regurgitation in babies that are under a year old is a very common phenomenon. To be more specific, we're referring…