Everything You Need to Know About Fetus in Fetu

The anomaly known as fetus in fetu is characterized by the fact that there are two twins: one of them develops, while the other lodges inside the first one, as a parasite. They almost always enter the abdominal region, but they have also been found in other parts of the body. 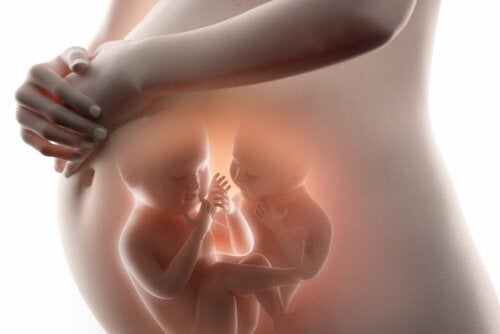 The first case of fetus in fetu was reported in 1800. Since then, about 200 cases have been reported worldwide. The rarity of this anomaly and its geographical dispersion have prevented in-depth studies of this phenomenon.

Meckel first discovered this strange condition. He gave it the name fetus in fetu to refer to those cases in which a parasitic twin is found inside its healthy sibling, who serves as his host.

It’s very common for doctors to initially diagnose this disease as a painless lump. 89% of cases have been detected in the first 18 months of life. However, there are also many cases in which they diagnose it late.

Fetus in fetu is a rare or orphan disease

There are only about 200 cases documented worldwide. This anomaly occurs in around 1 in 500,000 births. In most cases doctors diagnose it during childhood. However, it has also been found in adults up to 47 years of age.

You may be interested in: Eleven Habits You Should Avoid During Pregnancy

It’s a variant of the parasitic twins

Fetus in fetu is a variant of the phenomenon known as parasitic twins. This is a condition in which there are two twins attached and one of them has a much smaller body than the other.

In these cases, the host twin, or autosite, allows the parasite to survive, since it doesn’t have its own organs. Fetus in fetu has also been considered an extreme case of Siamese twins.

Fetus in fetu is an accident

Scientists don’t know the exact cause of this phenomenon. They just know that it’s an accident that happens at some point during the formation of the zygote. For some reason, the twins don’t separate completely and remain attached at some part of their body.

All of this happens before the embryo forms. After that, one of the twins develops normally, while the other atrophies. For this reason, it remains inside the healthy twin and depends completely on it for its survival.

Fetus in fetu has a strange appearance

It’s common for the host fetus to die before birth. When this doesn’t happen, the baby has a bulge in the area where the parasitic twin is lodged. In 80% of cases this happens in the abdominal region. However, it’s also possible for the parasitic twin to lodge in the scrotum, skull, etc.

Fetus in fetu is a humanoid. When doctors extract it, it’s wrapped in a membrane that makes it look similar to a chicken egg. However, it’s extremely hard and quite large. When removed from that shell, the parasitic twin is white. When doctors do this procedure, it dies, as it depends entirely on the healthy twin.

Fetus in fetu and teratoma

A teratoma is an encapsulated tumor that contains remains of tissues, and even organs. There are known cases of teratomas that contain hairs, teeth, bones, and even hearts, although this is quite rare.

Due to its characteristics, a teratoma is sometimes confused with fetus in fetu. Researchers have established criteria to differentiate the one from the other. Teratomas can become malignant, while fetus in fetu can’t. Likewise, in order to call it a fetus in fetu, it has to have a backbone.

It presents a risk to the host

The parasitic twin is a potential risk to the healthy twin. It turns into a load that you carry inside your body and doesn’t serve any purpose, and can weigh up to 1 kilogram (2.2 lbs). It has no brain, and an empty cranial cavity, and it also has no chest cavity, but instead has solid flesh.

The risk also depends on the location of the parasitic twin. As we already mentioned, it’s almost always located in the abdomen. However, there are cases in which it’s in the oral cavity (6), in the skull (7-9), in the liver (10) and other dangerous locations. There have been thirteen reported cases in which more than two parasitic twins coexist.

Gastroschisis in Newborns: A Dangerous Birth Defect
Gastroschisis in newborns is one of the most frequent congenital malformations, but the majority of the population doesn't know anything about it. Read more »
Link copied!
Interesting Articles
Health
Intestinal Flu: Symptoms, Treatment and Diet