Celiac Disease in Children and Teenagers

How Celiac disease manifests in children and teenagers varies depending on their age. It might lead to vomiting, constipation, and could even stunt their growth. 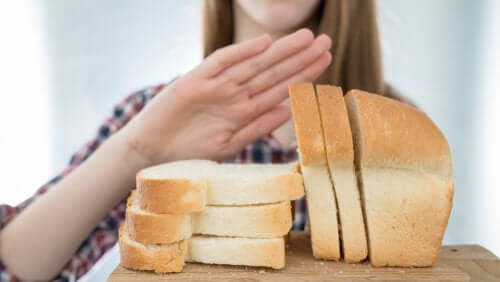 Celiac disease is what we commonly know as “gluten intolerance,” and it often afflicts children and teenagers. Unfortunately, celiac disease is one of the most common digestive disorders. Estimates indicate that it’s present in a large part of the world’s population, although many aren’t aware of it.

“Gluten” is a term used to refer to a set of proteins are present in numerous grains, especially wheat.

However, its prevalence in children and adolescents is higher than in adults. Almost 1 in 70 children are gluten intolerant. It’s a pathology with a large genetic component, so carriers of certain genes are at higher risk of it.

Currently, much of our diet revolves around grains and the amount of gluten in our food is considerable. Thus, in today’s article, we’ll explain everything you should know about celiac disease, especially when it affects children and teenagers.

What exactly is celiac disease?

Celiac disease is a pathology in which an autoimmune reaction against gluten occurs. Thus, the immune system reacts to this set of proteins, producing a series of alterations in the digestive system.

Several studies reveal that there’s a significant genetic component to celiac disease. What this means is people with certain genes are at higher risk of gluten intolerance. However, their symptoms don’t always develop. Also, certain diseases increase the risk of developing celiac disease. Diabetes Mellitus and Down Syndrome, among them.

What happens with this disease?

People with celiac disease have an immune reaction in their digestive system when they eat gluten. When a person eats a portion of food with gluten an immune reaction leads to inflammation of the lining of their intestine. The intestinal mucosal barrier lets us absorb the necessary nutrients to keep us healthy. However, when this mucosa alters, the intestine cannot get all the nutrients. Therefore, celiac disease produces malabsorption syndrome.

However, those who suffer from celiac disease can prevent symptoms or complications if they follow a strict gluten-free diet. If a doctor detects it in time and you avoid gluten consumption, then your intestinal mucosa will gradually regenerate.

You may be interested: Gluten-free Recipes Full of Carbohydrates for Celiacs

Celiac disease in children and adolescents

Celiac disease can occur at any time in life. However, symptoms vary with age. Also, as we mentioned above, the damage produced in the intestinal mucosa is reversible if detected early. So, when it comes to children and teenagers, you must be aware of the symptoms. This is because it’ll help you establish a proper diet and avoid possible future complications.

Similarly, older children and teenagers usually present symptoms like abdominal pain, vomiting, and constipation. They’re also children who are short for their age. In fact, these children may also have skin rashes and anemia. All this happens because the body doesn’t absorb all the nutrients it needs to properly develop.

How is celiac disease diagnosed in children?

On numerous occasions, children and teenagers have no symptoms or these go unnoticed. However, we know that genetics is a determining factor in celiac disease. So, if you or your partner have celiac disease, then you should consult a doctor who can assess your child.

There are several tests to detect celiac disease. First, they usually do a blood test in which they seek any antibodies for this pathology. Then, if the result is positive, the doctor will perform a small bowel biopsy in some cases. This consists of introducing a small probe through the mouth into the intestine. Once there, they take a small sample and analyze it in a lab.

There are numerous ways to diagnose a child who has this disease and the tests aren’t painful. Also, a timely diagnosis can significantly improve your child’s health.

Celiac disease in children and teenagers manifests differently depending on their age. So, if you think your child may have it, then consult a doctor. That way, they can perform the tests and give you advice regarding healthier diet options.

The Best Diet for People with Celiac Disease
Almost three out of four people with celiac disease don't know that they have it. Not following a gluten-free diet can seriously damage their health. Know how to identify it and what foods you should avoid. Read more »
Link copied!
Interesting Articles
Illnesses
Can Celiac Disease Cause Infertility?