How to make a low-calorie rice pudding

While you may associate dessert with sugar and calories, low-calorie rice pudding is a healthy, well-balanced alternative. 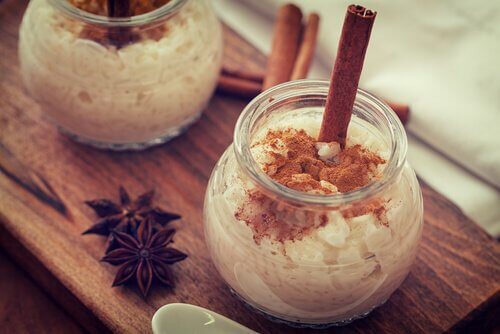 Would you like to learn how to prepare a low-calorie rice pudding? Even though you might be used to making the traditional recipe that contains sugar and whole milk, you can use other ingredients with lower calorie content.

Of course, this doesn’t mean you can eat large amounts of dessert. To maintain the concept of a healthy diet, you should eat moderate portions and eat it only occasionally. Enjoy it after your main meals or as a snack.

The ingredients called for in this low-calorie rice pudding all have a high nutritional value. To begin with, enriched white rice can provide thiamine, niacin, iron and folic acid, according to a study published in the Journal of the American Dietetic Association.

Likewise, we advise that you to use low-fat milk because it’s lower in calories and still has most of the nutritional quality of dairy products. These, according to a publication in Food & Nutrition Research, can protect you against many diseases.

Among other things, you can use other ingredients such as citrus zest, cinnamon, and the sweetener of your choice to obtain a more pleasant taste. Again, remember that the key to enjoying this treat without regrets is to eat it in moderate portions.

Recommended recipe: A Pear Pie Is A Healthy Dessert for Your Diet

How to make low-calorie rice pudding

With this recipe, a portion of your dessert will be around 83 kcal and will have little fat content. This is because cinnamon, orange peel, and lemons have zero calories.

Learn more: Which Kind of Rice is Best for Your Figure?

Other options for low-fat rice pudding

There’s another version of the rice pudding recipe you can make if you’re lactose intolerant intolerance or have allergies. It’s also great if you’re vegan or vegetarian. Just use vegan milk instead of dairy.

Also, those who are lactose intolerant can use lactose-free milk. Your choice will depend on your taste. The most important part is you can enjoy a healthy dessert without worrying about gaining weight.

As we said above, you can use any type of milk you want. There are all sorts of them in the market be it low-fat, lactose-free, or vegans such as soy and almond.

If you notice any type of digestive problem when you drink dairy, then, without a doubt, your best choice will be vegan milk. They’re very healthy and equally rich. Are you ready to try this recipe?

The Benefits of Vegetable Milks and How to Prepare Them
You can alternate vegetable milks with traditional milk so that you can benefit from all of the benefits that each one gives you. Read more »
Link copied!
Interesting Articles
Recipes
Chia Pudding for Breakfast

Who doesn't want to learn great tips for cooking pasta? Mamma mia, who never wants to cook a good pasta dish?! It's one of the most versatile recipes known. It's…