Colorectal polyps seldom cause symptoms, except in some cases where there's bleeding after evacuation. Generally, doctors detect them incidentally during an examination of the digestive tract. 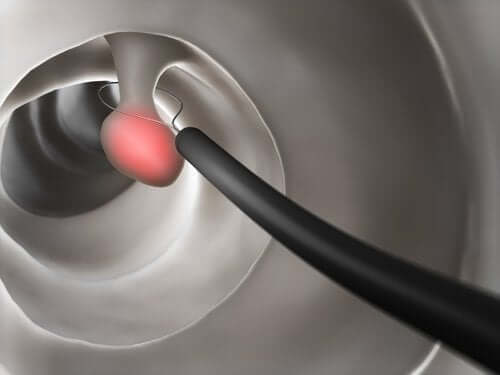 Colorectal polyps are one of the most common problems in that area of ​​the body. They affect approximately 15-20% of the population. The polyps are benign in most cases, although some are cancerous, or could become so over time.

Anyone can have colon polyps, but they’re more frequent in those who’ve had them before, or who are over 50 years old. This is also the case in those with a family history of having them and/or who have had colon cancer in the past.

Most of the time, colorectal polyps are asymptomatic and, generally, a colonoscopy can detect them. It’s important to have this scan periodically because removing the polyps in their early stages is much simpler and safer.

Colorectal polyps are pieces of additional tissue that grow inside the large intestine. They’re due to the grouping of a small set of cells that grow more in the intestinal mucosa. These are benign tumors and can also grow in other areas of the digestive system.

They range from 1 inch to several inches in diameter. They look like small bumps that sometimes grow on a kind of “stem,” so they resemble fungi. However, colon polyps can also be flat. Usually, they’re scattered throughout the intestine wall.

There are two kinds of polyps: neoplastic and non-neoplastic. The former can become cancerous and can be serrated polyps or adenomas. The latter are generally benign and include hyperplastic polyps, inflammatory polyps, and hamartomatous polyps. As a general rule, the larger the polyp, the more risk there is of it becoming cancerous.

The reason why polyps grow in the colon isn’t clear. Investigators established that the mutations of various genes alter the cell division process and this continues to take place, even when it isn’t necessary. As a result of this, the polyps form.

Some people are at greater risk of developing colon polyps, as mentioned above, namely those who are over 50 and have a personal or family history of polyps or colon cancer. Also at risk are smokers, alcohol users, obese people, and those with type 2 diabetes.

Another group at risk are those who suffer from ulcerative colitis or Crohn’s disease. In a few cases, there are inherited diseases that predispose a person to develop polyps. These diseases are:

Symptoms and diagnosis of colorectal polyps

In addition, constipation or diarrhea that lasts over a week is also suggestive of the presence of polyps. However, most of the time, doctors detect them through specific tests such as a colonoscopy, colonography, flexible sigmoidoscopy and/or stool analysis.

Colonoscopy is the most appropriate test to perform as it allows doctors to detect colorectal polyps. It also allows them to remove them when they find them. It’s a much more functional procedure.

Also read: Is it Possible to Enhance Colon Cancer Treatment?

Other data of interest

There are several ways to remove polyps during a colonoscopy. Doctors sometimes cut them with a wire or with biopsy forceps. It’s also possible to burn their stem with an electric element. These procedures aren’t painful as the lining of the intestine is insensitive to such stimuli.

After removal, the physician will send the tissue to a lab for study. They’ll establish from there if it’s cancerous or not. There are times when they can’t remove the polyps during a colonoscopy but they can still mark them or make an endoscopic tattoo on them. This makes the polyps easier to detect during surgery.

The removal of polyps is a polypectomy and is an outpatient procedure with few complications. Only in very few cases does it lead to bleeding or small perforations, which the doctor must subsequently treat. In all cases, they’ll recommend further colonoscopies in the following years.

The Diet and Preparation Before a Colonoscopy
Do you want to know more about the dieat and preparation before a colonoscopy? In this article, you'll learn what you need to do before this medical exam. Read more »
Link copied!
Interesting Articles
Illnesses
Nipple Discharge: Causes and Recommendations