Ciprofloxacin - Mechanism of Action and Indications

Ciprofloxacin is a broad-spectrum antibiotic used for treating urinary tract infections. Its effect is due to its ability to inhibit the DNA synthesis of bacteria. 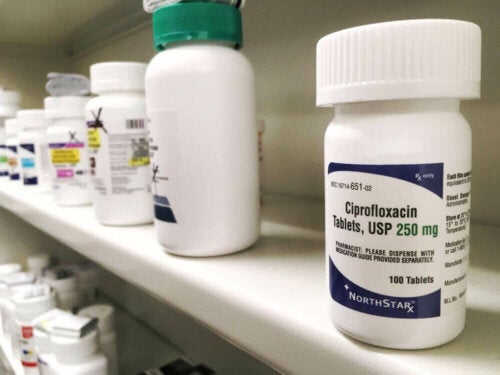 Ciprofloxacin is a drug with antibiotic properties that belongs to the fluoroquinolone family. It’s a broad-spectrum antibacterial drug. That is, it’s rather effective against diseases caused by both gram-positive and gram-negative bacteria.

This feature sets it apart from other drugs in the quinolone family of antibiotics, since most are effective only against negative-gram bacteria.

Is Ciprofloxacin a broad-spectrum antibiotic?

Antibiotics can be broad-spectrum or narrow-spectrum. The former are those that act against gram-positive and gram-negative bacteria. In contrast, those with a reduced spectrum are only effective against one type of bacteria.

However, you can differentiate gram-positive and gram-negative bacteria by the characteristics of their cell membranes. The former has a cell membrane composed of peptidoglycan and an internal cytoplasmic membrane formed by a double lipid layer.

Then there are the gram-negative bacteria, which, in addition to the cytoplasmic inner membrane, have another lipid bilayer in the outermost membrane. There’s a space called a periplasmic space between both membranes.

This gram-negative bacteria space is made up of peptidoglycan, which is much larger and wider than in gram-positive bacteria. As you can see, the cell membrane of the gram-negative is more complex than the positive one.

To find out if it’s one type or another, lab technicians must do a series of tests through which they classify the bacteria. Gram stain is the most common technique. Next, we’ll look at the following aspects of Ciprofloxacin in more detail:

Pharmacokinetics – what happens to the drug when it enters the body?

Pharmacokinetics is a term that encompasses the processes of absorption, distribution, metabolism, and elimination of drugs. In this respect, the mode of administration of this drug is oral. Its absorption rate is 70%.

However, you must know that ionic substances can chelate with this drug and reduce its absorption. In addition to oral administration, this drug can also be administered intravenously.

In regards to metabolism, this process takes place in the liver — this refers to the reactions the drug undergoes in the body in order to make it more soluble in water and thus favor its elimination. Small concentrations of four metabolites have been reported to be excreted via the urine through the kidneys:

Mechanism of action – how does this drug exert its effect on the body?

Ciprofloxacin owes its antibacterial action to the fact it inhibits DNA synthesis. To do this, it binds to portions, the proteins that are part of the membrane, and allows the drug to enter the cell.

Once inside the cell, it binds to DNA Gyrase, decreasing its activity. This is an enzyme that reduces molecular tension by supercoiling and allowing DNA replication.

Thus, by inhibiting the replication of the bacteria’s DNA, it prevents its proliferation and reverses the infection. Furthermore, human and mammalian cells contain a topoisomerase II, which can be inhibited by the drug in high doses, triggering a certain antineoplastic effect.

Note that it reduces its action when administered with other drugs that inhibit protein synthesis. This is because all the structures on which its action takes place are protein.

The most frequently reported adverse drug reactions are nausea and diarrhea. However, there’s a series of reactions derived from clinical trials and post-marketing surveillance with Ciprofloxacin — when administered orally and intravenously:

Even though they may seem many and varied, the above problems are infrequent. Therefore, one can say this is a fairly safe drug and with few side effects as long as you follow the professional indications.

Why You Shouldn’t Self-Medicate with Antibiotics
It’s never a good idea to self-medicate with antibiotics. Consequences could be serious. Consider the negative social effect and bacterial resistance Read more »
Link copied!
Interesting Articles
Medication
4 Types of Injections You Should Know About