Both alcohol and antibiotics are toxic substances that the body eliminates thanks to the liver metabolism. Combining both substances can put the liver at risk. 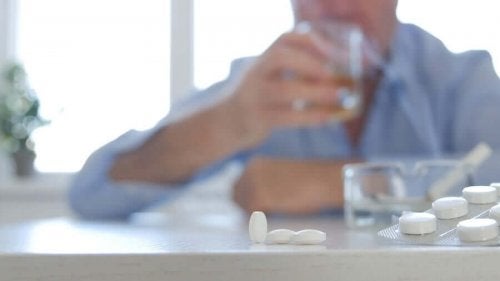 Have you ever heard that you shouldn’t drink alcohol when you’re taking medicine? You should be even more careful if you mix antibiotics and alcohol. The reason that mixing alcohol with antibiotics is bad for your health has to do with liver metabolism. However, it’s important to clarify some concepts to be able to explain this process.

Antibiotics have helped save millions of human lives ever since the first use of penicillin.

An antibiotic is a chemical substance, produced by a living creature or created synthetically, that kills or stops the growth of certain types of sensitive microorganisms. Antibiotics are drugs used for the treatment of bacterial infections, and because of that they are also known as antibacterials.

Antibiotics generally help an individual’s defenses until the local response is enough to control the infection. An antibiotic is bacteriostatic if it stops the growth of bacteria, and a bactericide if it kills them. They can sometimes cause both effects, depending on the case.

Alcohol is a drug that depresses the central nervous system and progressively inhibits brain functions. This causes symptoms of intoxication that affect brain activity, and cause a lack of coordination and changes in behavior.

Frequent and prolonged consumption of alcohol causes inflammation and destruction of liver cells. This results in cirrhosis of the liver.

Discover: How to Know if You’re Addicted to Alcoholic Beverages

What does the liver do? Liver metabolism

The liver is an essential organ that serves multiple purposes for the body.

The liver is one of the most important organs in our body. This is due, primarily, to the large number of important functions it carries out throughout the day.

The liver plays a large role in the metabolism; it controls the proteins in the blood and the distribution of some nutrients like iron. It regulates cholesterol and triglycerides and eliminates toxins.

One of the primary functions of the liver is to filter toxic materials out of the body. Given that both antibiotics and alcohol are toxic, it’s the liver that metabolizes them.

When this toxic material builds up, it results in toxic hepatitis. To determine if the liver metabolism is functioning correctly, we use liver function tests. These tests are used to evaluate the liver activity.

Liver function tests, to determine the functioning of the liver, measure certain proteins, enzymes, and substances including:

Discover: Why You Shouldn’t Self-Medicate with Antibiotics

Toxic hepatitis is a term that refers to liver inflammation. This inflammation can have various causes, the most frequent being infections. However, an abnormal reaction to a drug and exposure to toxic substances in nature can also cause it.

Apart from the mentioned causes, mixing antibiotics with alcohol also causes toxic hepatitis. This is because both are toxic substances, and they interact when combined. When this happens we can distinguish between two mechanisms.

To illustrate idiosyncratic toxic hepatitis, we’ll use the example of the antibiotic amoxicillin-clavulanic acid.  Currently this drug is the most frequent cause of idiosyncratic toxic hepatitis in the West. Mixed with alcohol it deactivates, causing the bacteria to become resistant. This means that, in the future, that bacteria can’t be eliminated using amoxicillin-clavulanic acid.

Currently, bacteria are becoming more and more resistant to antibiotics, a serious public health problem for the global population. To avoid this, we should follow the guidelines of medicines, not self-medicate nor take antibiotics to treat viral diseases like the flu or colds, and also avoid the consumption of antibiotics with other substances like alcohol.

3 Tips Every Person with Cirrhosis Must Follow
There are certain things you can do to improve your quality of life, so don't be discouraged. Here are three helpful tips for cirrhosis. Read more »
Link copied!
Interesting Articles
Illnesses
Congenital Insensitivity to Pain: What Is It?

When we talk about a dust allergy, we're actually referring to the allergy to dust mites that live in this environment. You can't be allergic to the dust itself, but…

Interesting Articles
Medication
Uses and Side Effects of Citalopram